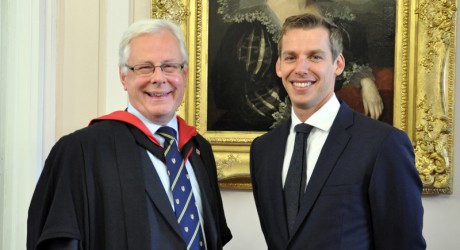 Starting the Junior School in 1986, David showed a keen interest in swimming, rugby and cross-country. As the years progressed, his sporting commitments soon clashed and he focussed on the one sport.

Throughout his years at the city school, he enjoyed swimming competitions from an early age and fondly remembers the encouragement that his former headmaster, Ian Black (a Commonwealth Games gold medal winner in 1958) gave him to pursue his talent.

In his final year, in Senior School, David was Blackfriars House Captain.

Graduating from Robert Gordon’s College in 1999, David is a triple Olympian and double Commonwealth Games champion.

He is on the board of directors at Swimming Scotland and has been selected as an Ambassador for the 2014 Commonwealth Games in Glasgow.

After achieving his lifetime ambition of competing in an individual final at the London 2012 Olympics, David retired from competitive swimming in October 2012. He now works for his former sports management company, Red Sky Management, based in Edinburgh, as a business coach.

Former pupil, David, says: “It is a fantastic time to talk to the pupils and staff at Robert Gordon’s College with the excitement surrounding the Commonwealth Games 2014.

“The privilege of addressing the entire school presents me with an opportunity to share my experiences with them and inspire them to aim even higher and believe that they too can turn their dreams into reality.”

Head of College, Mr Ouston said: “We look forward to celebrating our founder Robert Gordon this year with David who will be sure to inspire our pupils of all ages to make the most of their talents and education at Robert Gordon’s College.”

On Thursday 19th September Robert Gordon’s College hold their annual Founder’s Day Celebration, during which the whole school, led by the pipe band, marches by Schoolhill and Back Wynd to the nearby Kirk of St Nicholas for a service at 11.15am.