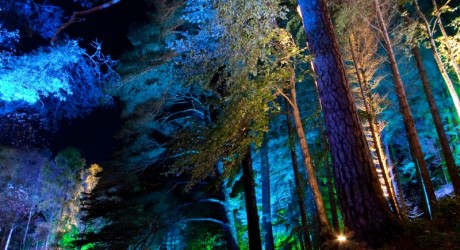 THE multi award-winning sound and light show, The Enchanted Forest, opens this week and, thanks to Fife outdoor clothing company Keela International, a party of enthusiasts from the region will be getting the first opportunity to set foot in the forest as part of the national Britain on Foot campaign.

The Britain on Foot campaign is specifically aimed at encouraging more people to explore the great outdoors through walking, cycling, or climbing, and to create a healthier nation.

Keela International have been producing garments designed for the outdoor sector for the last 30 years and, as partner to the national campaign, identified The Enchanted Forest as a potential event that would both achieve the aim of getting people into the great outdoors, as well as creating an enjoyable night out for people.

“The outdoors can sometimes be a little bit daunting, but The Enchanted Forest is a unique event that gets people interacting with the outdoors without any of the preconceptions they might have about how they have to dress, or what they need to take with them.

“It seemed like the perfect match to encourage people to get outdoors and we’re delighted that they have been able to assist us in making this happen.”

The group will attend an exclusive preview night on Wednesday October 2nd, prior to the show opening to the general public on Friday 4th October, and will be among a small number of competition winners to see this year’s show before anyone else.

Over 32,000 visitors are expected to attend during the show’s 23-night run throughout October, many of them travelling a significant distance to attend.

The 2013 show, absorb, has been designed by Scottish lighting designers Kate Bonney and Simon Hayes and with music by RJ McConnell, which includes a specially commissioned orchestral piece in collaboration with composer Jon Beales.

“We are very happy to support the Britain on Foot campaign in this way – the event is all about encouraging people to enjoy the beauty of the Autumnal forest at a time of day that people wouldn’t normally be in forests, and at a time of year where people are more likely to stay indoors.

“We’re grateful to Keela International for organising this trip and look forward to welcoming their visitors to The Enchanted Forest.”