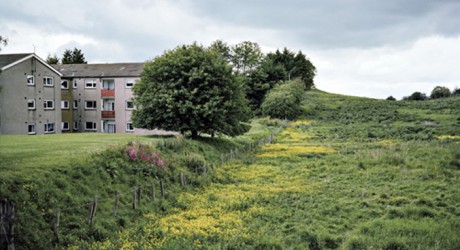 THE Institut français is delighted to present Geum Urbanum #1 Edinburgh, an exhibition of the work of Marseille-based photographer Geoffroy Mathieu to celebrate the Edinburgh Doors Open Day ‘Natural Edinburgh’.

Mathieu’s photographic series offers a poetic account of the unique relationship between nature and urban spaces in Scotland’s capital.

Geum Urbanum is based on the idea that nature as a non-urban, uninhabited space is a product of urban culture.

In the city, one is constantly in nature.

Some cities, however, show their natural side more than others and Edinburgh is one of the most fascinating examples.

Through his photos, Mathieu aspires to ‘read’ the city differently, no longer as opposed to nature but as an emanation of nature.

An ambition that becomes incredibly meaningful in a city like Edinburgh, where Mathieu was invited for an artist residency at the Institut français in 2011.

Mathieu explains: “I criss-crossed the city from the centre to its periphery looking at how nature and city mix: the untouched forests and rivers going through the city, the man-controlled, meticulously trimmed lawns, gardens and golf courses, the kitchen gardens and waste lands punctuating the urban landscapes…

“The city leaves you under the impression that here more than anywhere else, man is harmoniously managing nature, in a very Anglo-Saxon kind of way.”

Geum Urbanum was initiated in Marseille as Mathieu took part in designing the GR®2013, a one of a kind semi-urban hiking trail between urban and natural areas for Marseille-Provence 2013 (European Capital of Culture).

Over the course of three years, the creation of this 360-kilometres long ‘metropolitan trail’ led Mathieu and other artists-walkers to roam and photograph the peri-urban landscapes of Marseille and dozens of surrounding towns, a series of natural spaces showing signs of urbanity everywhere.

Initially viewed as unique to Marseille, it became gradually obvious that this type of landscape could be found everywhere: in the outlying districts of smaller towns, in intercity fringes, and in the suburbs of major cities in France, the Mediterranean and across the world.

A reflection that led Mathieu to Tangier in 2010 and finally to Edinburgh in the summer 2011 and captured in a book of photos – Geum Urbanum – that will be on display and on sale in the exhibition (Editions Filigranes, September 2013).

The PDF version of the book Geum Urbanum is available upon request.

Jointly with Bertrand Stofleth, and in partnership with Marseille-Provence 2013 (European Capital of Culture) and the Centre national des arts plastiques, he has also set up a bespoke Photographic Observatory of the Landscape for the GR®2013, a 365 kilometres semi-urban hiking trail between urban and natural areas around Marseille.

- The Institut français d’Ecosse is the agency of the French Ministry of Foreign and European Affairs with responsibility for cultural activity outside France. In Scotland, the agency is represented by the Institut français d’Ecosse (Edinburgh) which promotes French language and culture by providing French courses and organising events (film screenings, talks, exhibitions, concerts, etc.). It also aims to encourage cross-cultural exchange between France and Scotland, in cooperation with Scottish Francophile institutions.

- The Geum urbanum, also known as wood avens, colewort or St Benedict’s herb, owes its scientific name (Geum, from the Greek Geouma for taste, flavour) to the pleasant, clove-like smell emitted by its roots. This perennial plant grows in shady places – on uncultivated land or in verges. In cities it can be found in the shade of flower beds and hedges. The plant possesses anti-inflammatory, antiseptic and healing properties. Its young leaves can be eaten in salad.