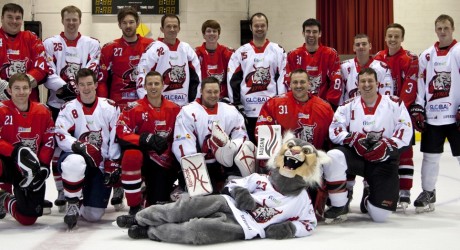 ABERDEEN’s premier ice hockey team is getting ready to freeze out the competition as they take to the ice for their second home game.

The Aberdeen Lynx, which compete in the Scottish National League, started the season off well beating the Dundee comets, and are looking to retain their home game winning record as they welcome the Edinburgh Capitals on Saturday night.

Team captain for the Lynx, Jordan Leyden said: “We are really looking forward to the game on Saturday night and we are hoping to continue our good form so far. We are working well as a team with a new coach and players and everyone is ready to put on an action packed game this week.

“Our loyal fans have already shown their commitment with over 800 people attending our first home game, are we are urging them to come along and show their support for what is set to be an exciting game.”

The Lynx, who play at the Aberdeen Linx Ice Arena on the beach promenade, welcomed new head coach, Rod Ramsay, formally of rivals Dundee Tigers, at the beginning of the new season and signed several new players, as well as retaining experienced stars from last year’s Lynx team.

The team are looking to smash last year’s league position, and aim to reach the top three.

The Aberdeen Lynx will face off against the Edinburgh Capitals on Saturday, 28 September at 7pm, at the Aberdeen Links Ice Arena – Tickets are priced at £6 for adults, £4 for kids.

They are also welcoming fans to come along early to watch the team warm up and also check out the selection of new season merchandise.

For more information about the Aberdeen Lynx and their upcoming features, visit the website www.aberdeenlynx.com or email contactus@aberdeenlynx.com.

Issued by Frasermedia Ltd on behalf of The Aberdeen Lynx Ice Hockey.