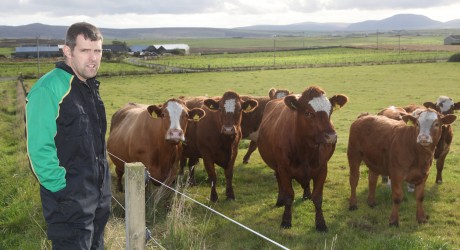 ORKNEY’S debut monitor farmer says he has learnt a great deal from his experiences during the first year of the project.

Steven Sandison has entered into the spirit of being a monitor farmer with zeal and believes that the sharing of information, performance recording and ideas he puts into practice will increase the profitability of his farm.

Mr Sandison has only been farming in his own right since 2003 and does not have his full quota of Single Farm Payment (SFP), so for him maximising output from his farm is critical to its sustainability. Millburn Farm in the parish of Harray, on Orkney’s mainland, extends to 230acres while a further 100 acres is taken on a seasonal let basis.

The farm is mostly down to permanent and temporary grass with about 20 acres of rough razing and 30 acres of barley, some of which is kept for feeding cows, but the majority is sold.

Stocking consists of 100 Simmental cross and Saler cross cows with Saler, Simmental and Charolais bulls all being used. This is where the suggestions put forward at the community group meetings have been invaluable.

“There have been as many as 70 farmers at some of the meetings and the variety of comments and opinions is very interesting,” said Mr Sandison, who farms in partnership with his wife, Lorraine.

The Sandisons sell all the calves from the spring calving herd at weaning to private buyers in Orkney. However, as a result of suggestions put forward at meetings, he decided to get rid of one of his Charolais bulls and concentrate on the Simmental and Saler crosses, to produce heifers for breeding.

Facilitators, George Baikie and Graham Scott, both of SRUC, Scotland’s Rural College, have encouraged performance recording and blood and soil testing as part of the programme.

Mr Sandison explained this had proved one of the greatest benefits of being a monitor farm. “I had a problem with my in-calf and newly calved heifers being too thin, and despite blood testing and dosing for fluke, worms and so on we could not get to the bottom of it.

“However, the soil analysis showed a cobalt deficiency in the ground, now the cows and calves are bolused and being supplemented with grass minerals and so far the results look good.”

The soil analysis also showed a problem with ph levels. Usually in Orkney, shell sand is used to combat this rather than lime and Steven explained that the expected rate is two tonnes of sand is equivalent to one tonne of lime.

However, Graham Scott suggested he got the sand analysed and the results revealed that he only had to buy 1.5 tonnes to get the equivalent ph benefit, which he estimates has saved him at least £500.

Now well into his second year as a monitor farmer, Mr Sandison is collecting data from his stock – such as birth weights and daily liveweight gains – to give him a picture of his herd’s performance.

He believes that, over a few years, this data will settle into a pattern which will show him his best performing females and help him with selecting replacements.

One of the issues discussed at the meetings was the decline in sale weight of his calves over three years. Steven made the decision to cut cow numbers back in December to reduce stocking rates.

So far, he reckons this has worked well and, with more grass available, the calves are looking better and Steven is hopeful that he can produce the same total weight of calves from fewer cows.

His aim is to maximise production from the land he has, rather than increasing stocking rates and having the expense of extra cows.

Over the three years of the programme, extensive data is collected by the facilitator and made available, not only to the group but also on the QMS website, where farmers can easily see the benefits of certain actions and decide whether to apply them to their own farms.

Mr Sandison said that one of the big debates among Orkney farmers is “when to sell calves”.

He is unusual in selling at weaning but feels that by collecting data from himself, the farmers who buy his calves to grow on, there should be some good information after three years which could go some way to answering this conundrum.

Although opening the doors to your business can be difficult, Mr Sandison certainly feels that he has benefited from the process. He said: “It has been great to see the interest from all ages at the community group meetings.

“I have also enjoyed the steering group meetings where decisions are made and I can take positive action to improve my livestock and farm. I am really looking forward to the final year of the programme, when I think we will see real benefits.”

The Orkney monitor farm is funded by Skills Development Scotland, run by NFU Scotland and supported by Quality Meat Scotland.

The next meeting will be held on October 16th. Further information is available from the monitor farm facilitators George Baikie and Graham Scott of SAC Consulting, a division of Scotland’s Rural College (SRUC). They can be contacted on 01856 872698.