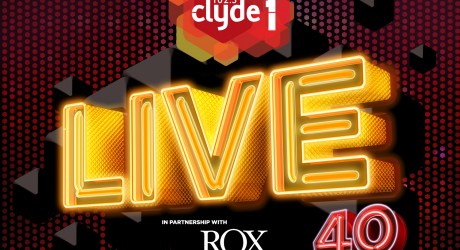 Clyde 1 LIVE returns with stellar line-up for its biggest-ever show, at the new SSE Hydro on the 13 December, with more acts to be announced soon

CLYDE 1 is delighted to announce The Saturdays, Union J, Rizzle Kicks, Tom Odell, The Vamps and George Bowie as the first acts confirmed to perform at Clyde 1 LIVE in December.

Clyde 1 LIVE, in partnership with ROX Diamonds & Thrills, is being held at The SSE Hydro and will kick off a year of celebrations to mark the station’s 40th birthday.

The event will be the biggest-ever hosted by the station with more than 12,000 music fans expected to pack out the stunning new venue to hear a host of the hottest A-list pop acts. Tickets for the gig are already on sale at ticketSOUP.com / 0844 395 4000.

“While Clyde 1 LIVE 2013 has been planned for some time now it is when the first acts are confirmed that the whole thing really comes to life.

“The Saturdays, Union J, Rizzle Kicks, Tom Odell and The Vamps represent some of the UK’s best and most current live music and are a really diverse mix which ensures there really will be something for everyone on the night.

“Our biggest challenge might be accommodating everyone who wants to join us for this unique night of live music and celebration so I’d encourage listeners to snap up their tickets quickly.

“We’ll announce our next wave of acts very soon and from the names I am hearing we are talking to Clyde 1 LIVE 2013 is set to go off the scale. I can’t wait.”

Clyde 1 Live 2013 builds on the success of the same event held at the SECC for the past three years, with acts such as Calvin Harris, JLS, Labrinth, Jesse J, and Olly Murs having performed.

This year’s event will also incorporate a number of additional features to celebrate the station’s 40th birthday. A commemorative and official Clyde 1 LIVE t-shirt competition is being run for young people, with the winning design printed and all sale profits going to Clyde 1’s charity, Cash for Kids. T-shirts will be available to buy at the event and online at www.clyde1.com

Cash for Kids will also be benefitting from a special pre-concert event at The Hydro, where guests will enjoy a unique dining experience and premier concert seats, with all profits going to the charity. Further information can be requested from cashforkids@radioclyde.com.

The Saturdays storm back with their dancefloor-ready new single ‘Disco Love’ on October 6th through Polydor Records.

The Saturdays have been on an incredible winning streak since they first debuted in 2008. They have sold over five million records and scored three top ten albums and 12 top ten singles. Their recent TV show for the E! network continues to launch worldwide and will be seen in over 45 countries this year. Between them, the girls have over 1.5 million fans on Facebook and 4.7 million on Twitter.

Please meet Union J…JJ, Jaymi, George and Josh. Perhaps they don’t need an introduction after earning superstardom on the ninth series of The X Factor which saw them finish fourth place!  Their trajectory since then as one of the hottest boy bands on the planet has been stellar with legions of fans on twitter and facebook clambering to make them one of the most talked about bands in the world.

Following in the footsteps of world beaters ‘One Direction’ hasn’t phased them either with the band admitting that Harry and co. are their main inspiration instead of being their competition. With top ten hit ‘I’ll Carry You’, and new single ‘Beautiful Life’ in the pipeline, the One Direction lads might soon be calling Union J their inspiration instead. Their self-titled debut album drops in October 28th  through RCA.

Platinum selling duo Rizzle Kicks who stormed the UK’s charts and hearts in 2011, like a collective breath of fresh air, with the release of their hit packed debut album, ‘Stereo Typical’, make their performance debut at Clyde 1 LIVE

‘Stereo Typical’, featuring the joyous hit singles, ‘Down With The Trumpets’ and ‘Mama Do The Hump’, introduced Jordan ‘Rizzle’ Stephens and Harley ‘Sylvester’ Alexander-Sule as the most vibrant, refreshing, lyrically acute and downright entertaining act to emerge from the UK in years.

Since the album’s release Jordan and Harley’s staggering social network stats. prove they have become a major force in the pop landscape : 590,000 albums and 1.6 million singles sold worldwide, 1.3 million twitter followers, over 56 million views on YouTube and VEVO, 1.1 million Likes on Facebook, 200,000+ followers on Instagram and well over 1.2 million plays on Soundcloud.

Add to this a no.1 single with Olly Murs, two sell-out headline tours, a Brit Award nomination, five MOBO nominations and I think it’s fair to say that we can expect those figures to soar once the tunes start tumbling from new album ‘Roaring ‘20s’ which is released on September 2nd.

The Vamps’ new found position as superstars-in-waiting is a social media fantasy come true. Four teenage musicians from disparate parts of the country hook up via their homemade demos on YouTube – 15 million online hits and a major label recording deal later and the UK four piece have become one of the heaviest bleeps on the pop radar.

Singer Brad’s soaring vocals and the band’s rocky, acoustic guitar riffs have attracted a raft of new fans. “When we got a thousand followers on Youtube we were really happy,” says Tristan. “Then we had 2,000, 5,000, 10,000… it kept going up and up and up…”

Major label interest followed soon after and EMI signed the four piece to a recording deal. The band were then flown to New York and LA to sketch out the tracks that will make up their forthcoming debut album – due for release early 2014. With 30 tracks demoed by the band, The Vamps opening shot is a release that James promises will arrive big on “feel good guitar riffs and melodic anthems”.

Singer songwriter, Tom Odell, has burst onto the scene over the last 12 months after being named the BRITs’ Critics’ Choice Award winner in 2013, previously won by artists including Adele,  Florence and the Machine and Emeli Sande.

Tom’s number 1 selling album ‘Long Way Down’, was released last month to mass critical acclaim. The album also received a similarly warm welcome around the world where it has gone top ten across Europe and Asia.

Tom supported one of his heroes, Elton John at this year’s iTunes Festival, which will he said was “a massive honour”.

Having played an incredible plethora of festivals so far this summer (including a stand out performance at Glastonbury), Tom will return to the US later this month where he will make his second US TV appearance on the The Conan O’Brien Show, as well as playing a string of live dates.