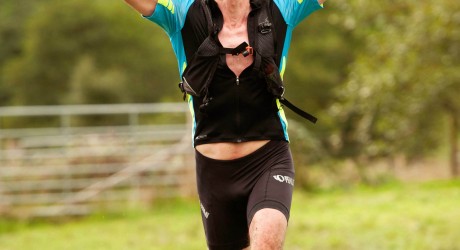 OVER a 100 people competed in one of Scotland’s toughest marathons today – joined by hundreds more who entered the half marathon and 10k events – to raise tens of thousands of pounds for NSPCC Childline Schools and young people living in disadvantaged communities in Scotland.

A record number of people from all over the UK and Europe took part in the Glencoe Marathon Gathering, which was filmed for BBC2’s monthly outdoor sports programme, The Adventure Show, and is due to be televised later this year.

Scottish running legend, Lucy Colquhoun, was among those taking part in this year’s Glencoe Marathon. Lucy is well known for taking part in tough endurance races around the world.

Lucy was the first woman over the line, completing the 26.2mile course in 4 hours, 7 minutes and 13 seconds.

Commenting, she said: “It’s been a privilege to take part in such a vibrant event and it’s been great to get back out and remind myself why I love running – the scenery, the camaraderie and, of course, the cake at the end!”

The full off road marathon trail run ascends a total of 1,608 metres, up the Devil’s Staircase, through the heart of Glencoe and into the foothills of Ben Nevis. Alan Ross was the fastest competitor in the full marathon, crossing the line in just 3 hours, 45 minutes and 6 seconds.

First to cross the line in The Mamores Half Marathon, which joins the marathon route at Kinlochleven was Tom Jess, who completed the route in 1 hour 57 minutes and 6 seconds. The Glen Nevis 10k was won by 17 year-old Calum Fraser, who recorded a time of 43 minutes and 1 second.

A percentage of funds raised will also go to Project Northern Lights, a charity established to provide skills for 15-25 year-olds living in disadvantaged communities in Scotland to help improve their education, training and employment prospects.

She said: “It was an incredible day with lots of people striding out to raise money for two very worthwhile causes and I am delighted that so many people participated in the event.”

Event organiser, David Fox-Pitt of Loch Tay-based WildFox Events, said: “This year’s event attracted entrants from all over the UK and Europe and for some it was a test of endurance, strength and stamina.

“For others, it was as much about enjoying the spectacular scenery and a great day out, but everyone had one thing spurring them on and that was to raise money for two deserving good charities.

“This means many more children and young people supported by NSPCC and Project Northern Lights will stand to benefit as a result, and I’d like to thank all our participants and all those who pledged their support to these charities and to making this event such a resounding success.”

WildFox Events Ltd is based in Kindrochit in Loch Tay, Scotland. The business was founded in 1999 and to date has helped raise over £20million for charities, both here in the UK and in the world’s poorest countries. In 2012, over 2,000 people participated in six adventure challenges covering a distance of around 120,000 miles and raising £1million for charities including: ABF The Soldiers’ Charity, Alzheimer Scotland, Asthma UK, Maggie’s, Mary’s Meals, Mercy Corps, NSPCC, Oxfam, Prince’s Scotland Youth Business Trust (PSYBT) and Water Aid.