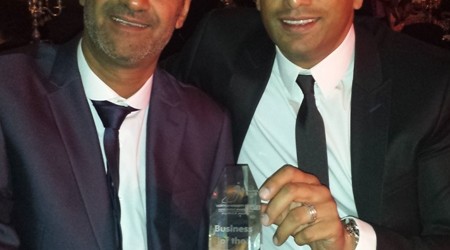 COOK and Indi’s World Buffet, the rapidly expanding restaurant chain, has been named Business of the Year in the Scottish Minority Ethnic Achievement Awards 2013.

Says a spokesperson: “Praising the exceptional quality of Cook & Indi’s World Buffet’s international cuisine, the panel of judges for the prestigious annual awards said that they had no hesitation in acknowledging the exceptional achievements of a business that was bringing the world on a plate to Scotland’s Central Belt.”

Accepting the award, Cook Gill, co-founder of the restaurant chain, said: “We’re delighted to win this award, which provides further proof that the West of Scotland is rapidly developing a taste for our pioneering ‘world on a plate’ offering!

“We’d like to dedicate this award to our many hard-working staff who strive every day to ensure that all our customers enjoy a delicious dining experience.”

Competitors for nearly a decade, Cook Gill and Indi Singh joined forces two years ago to introduce the concept of World Buffet to Scotland.

Starting from humble beginnings in an empty shell in Hamilton, the pair proceeded to open five restaurants, with the same number of openings planned over the next two years as the West of Scotland develops a taste for its ‘world on a plate’ concept.

And its fixed-price system, which starts from just £5.99, means that diners can eat as much as they want – whether double or triple helpings – which appeals to everyone, children and pensioner alike.

Already the largest chain of world buffet in Scotland, Cook & Indi’s World Buffet employs a staff of 130 and is on target to achieve a turnover of £4 million this year.

The Scottish Minority Ethnic Achievement Awards is an annual event designed to recognise the significant contribution made by Black, Asian and Minority Ethnic communities in civic, political and business life.