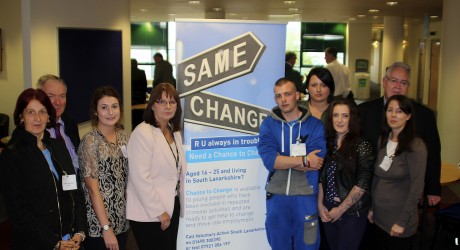 A NEW employability-focused project that aims to help young offenders change their lives for the better had its official launch on Thursday 19th September at the University of the West of Scotland’s Hamilton campus.

Chance to Change, as it is known, will utilise the time and effort of volunteer mentors, pairing them with young people who have expressed a desire to leave their criminal past behind.

Receiving full support and training from the project co-ordinators, the mentors will meet regularly with the young person with whom they are matched, discussing ambitions, interests and concerns.

They will also encourage positive lifestyle changes that will help get the young people on the path to training, education and employment.

The event was an opportunity to hear from mentors, mentees and those running the programme as they outlined their hopes and expectations for the project.

An audience of around 50 included representatives from Westminster, South Lanarkshire Council and the Scottish Government.

The project has received over £180,000 in funding through the Scottish Government’s Reducing Reoffending Change Fund.

Although the first batch of mentors have already been recruited, VASLan team leader, Jenny Gemmell, used the event to stress the importance of finding another group of committed volunteers to give Chance to Change the greatest chance of success.

VASLan’s employability officer, Ian McLaughlan, also spoke about the qualities required of mentors and the importance of having infinite patience when dealing with young people, many of whom have chaotic lifestyles.

The most powerful moments of the day came when the audience heard from those who have been involved closely with Chance to Change and similar projects previously run by VASLan.

Jean is one of the new mentors recruited for this project. She spoke about how, when she was 16, she found herself in a similar situation to some of the young people targeted by the project.

“I was homeless, I was a single mum and verging on getting involved in crime,” she said. “But I met somebody who inspired me. It wasn’t easy, it took a lot of hard work, but I was able to break that cycle – not just for me, but for my kids as well.

“If you’d have told me then I would have ended up as a qualified counsellor I would have laughed and run a mile. I’ve been hugely impressed by the staff running the project and the effort I’ve already seen from the young people involved.

“It’s been a privilege for them to put their trust and faith in me.”

The audience then heard from Scott, 24, who has been involved in similar VASLan mentoring projects. When he was 16, he was drinking too much, involved in gang violence and was living in a homeless unit. It was then he met project co-ordinator, Winnie Brown.

“Winnie showed me where I was going wrong,” he says.

He feels that the support from the project and the personal development courses it introduced him to had an enormous impact on his life. He’s now in work and has even introduced one of his friends to VASLan’s Employability Team.

Rhiannon, 17, was recently referred to Chance to Change.

She also had problems with alcohol, going missing for long periods of time and had racked up a number of charges. She told the audience that in the few weeks she had been involved in the project, she had already noticed a massive difference in herself.

“I’ve always had low confidence,” she said. “Just being able to speak to a group like this shows how much it’s helping. This is the biggest step ever for me. It’s brilliant.”

Jim Hood, MP for Lanark and Hamilton East also attended the event, and came away hugely impressed by the project and what he had heard from the speakers.

“It was a humbling experience to hear from the kids,” he said.

“With a problem like reoffending, there is no silver bullet. But I’ve been a supporter of VASLan for years, and the voluntary sector is in an excellent position to work on projects like this. If you can rescue some of these kids, then it makes it worthwhile.

VASLan are looking for a new group of volunteer mentors to help with this project. If you are interested, or would like further information, please contact Ian McLaughlan on 01698 300 390 or ian.mclaughlin@vaslan.org.uk.