Media Release: Cook and Indi’s World Buffet brings even more of the world on a plate to Darnley 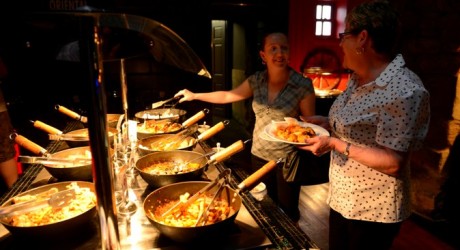 COOK and Indi’s World Buffet, the popular new restaurant chain, is bringing even more of the world on a plate to Darnley, with the introduction of even more international offerings.

And now that Darnley locals have developed a taste for its pioneering ‘world on a plate’ offering, the restaurant has expanded its menu even further with the introduction of burgers, a carvery serving up beef and poultry and a special kids section.

Indi Singh, co-founder of the restaurant, said: “We’re delighted to serve up even more of the world on a plate in Darnley! With our new dishes are already going down a treat with locals, it looks like Darnley has an insatiable appetite for international cuisine!”

The fixed price system at Cook and Indi’s World Buffet, with three course meals starting from just £6.99, means that diners can eat as much as they want – whether double or triple helpings – which appeals to everyone; children and pensioner alike.

“The idea behind our World Buffet is to bring together various cuisines from different parts of the world so that when families are dining out there’s no need for an argument about which restaurant to go to, because we offer food to suit everyone’s tastes!” said Indi.