Media Release: Gaelic short films to be shown in Uist 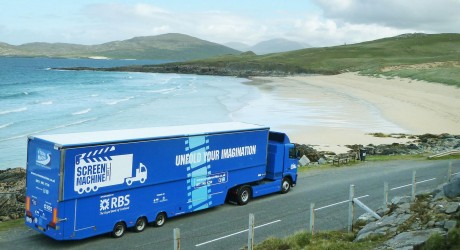 TO celebrate its 15th year on the road, the Screen Machine has teamed up with FilmG, MG ALBA’s Gaelic short film competition, to show films by various Hebridean filmmakers during this month’s tour of the Western Isles.

These films will be shown prior to the main feature when the Screen Machine visits Daliburgh, Lochmaddy and Tarbert.

Jonathan Melville, the Screen Machine 15th anniversary co-ordinator, said: “It’s an exciting year for the mobile cinema and we’re pleased to be able to show films with a Hebridean connection before our main features. If the response to these Gaelic shorts is positive, we’d be keen to screen more on future tours.”

FilmG project manager Floraidh Forrest, who is herself from South Uist, is delighted with this collaboration.

She said: “We now have an archive of over 300 Gaelic short films and although all the films are available to view on our website, we feel it is important to get them screened publicly too. We’ve had some really good entries from the Western Isles over the years so it is great to get them shown on home turf.”

Among the films being screened will be Paul Steele’s drama Aodainn which he filmed whilst working as an editor in Glasgow.

Paul has since moved back to Uist and works as a youth worker with the Island Media Project. He said: “I’m really happy that Aodainn is being shown in Uist where my friends and family can come along to see it.

“It was good fun to make the film and I came away with some great prizes so I’d encourage anyone interested in telling stories to give it a go through the medium of film.”

As well as film screenings, FilmG and Screen Machine will hold a sci-fi workshop for teenagers, led by filmmaker, Uisdean Murray, on Saturday 26 October at Sgoil Lionacleit.

The workshop will focus on low-budget filmmaking and teenagers are asked to bring their own filming equipment with them such as mobile phones.

Floraidh said: “The workshop should be great fun, Uisdean will get the kids set up a scene and film it in the morning and then in the afternoon they’ll get to do some editing. The workshop will be followed by a screening of the classic Back to the Future, what better way to spend a Saturday?”

For more details on up and coming events visit www.screenmachine.co.uk and www.filmg.co.uk.  FilmG is now open for entries contact fios@filmg.co.uk.

FilmG is project managed by Cànan, the creative media, language resource and design company based at the Fàs Centre at on the Isle of Skye.

There are two main competitions in FilmG, one for adults with no previous director or producer broadcast credits and one for entrants aged between 12 and 17. This is to ensure that the project focuses specifically on bringing new talent to the fore. Both competitions will culminate in a gala awards ceremony. For more information on FilmG, please visit www.filmg.co.uk.