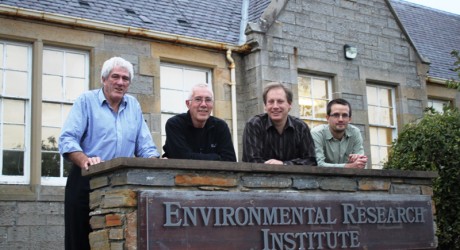 A NEW study is to investigate the migratory patterns of one of Scotland’s most iconic fish, the wild Atlantic salmon.

The research will also look at the impact marine renewable devices may have on the species.

The project will focus on the Pentland Firth, a key area for both salmon and marine renewable developments.

The Firth is close to all of the rivers of Caithness and northern Sutherland and salmon use it as a route to and from the large east coast rivers further south. The area has also become an international focal point for the development of marine renewables because of the strength of its wind and wave power.

The Pentland Salmon Initiative is being led by scientists from North Highland College UHI’s Environmental Research Institute (ERI), part of the University of the Highlands and Islands. Based in Thurso, overlooking the Firth itself, the researchers are ideally placed to take up the challenge.

The group has also enlisted the expertise of Alan Youngson, formerly of the Freshwater Fisheries Laboratory in Pitlochry, and Professor Tony Hawkins, former director of the Marine Laboratory in Aberdeen.

As the project progresses, the team will link up with colleagues from the Rivers and Lochs Institute at Inverness College UHI and together develop a partnership of stakeholders with interests in marine renewables and salmon migration, including fishery boards, planners and developers.

The initial focus of the study will be on mapping salmon migration in northern coastal waters. The project will use new information on the complex water movements in this region to help with this.

As part of the research, scientists will collect field data on the effects the construction and operation of marine renewable energy developments may have on the fish’s behaviour.

They will seek to find out if noise and other aspects affect the species.

Speaking about the project, Professor Stuart Gibb, director of the Environmental Research Institute, said: “Salmon support important economic activity in and around rivers across Scotland.

“Despite this, little is known about their behaviour when passing through our coastal seas. New research is needed if we are to understand how salmon may interact with the arrays of marine renewable devices planned for Scotland’s coastal zone.

“This has become a high priority and exciting area of science for the ERI and our partners in the university.

“We are immensely honoured that scientists of the calibre of Alan Youngson and Professor Hawkins have chosen to join us.”

Professor Gibb continued: “They bring a truly unrivalled wealth of knowledge and experience that will be invaluable in addressing key questions relating to the behaviour of migratory salmon and their potential interaction with marine energy installations.”

Professor Tony Hawkins said: “It will be a pleasure to work with scientists from the Environmental Research Institute on the exciting topic of salmon behaviour.

“There is a strong need for more studies of the movements of salmon in the sea, both during the outward smolt migration and the return migration of adult salmon to the Scottish coast.

“We also need to know more about the effects of renewable energy developments upon the behaviour of salmon and the health of salmon populations.

“The Institute is well placed to take forward this new research and I look forward to exchanging ideas and proposals with my new colleagues in Thurso and Inverness.”

Alan Youngson added: “Caithness and Sutherland are central to new developments in marine energy. Our goal is to ensure that salmon rivers in the north and elsewhere remain in good shape while the new industries prosper.”

MEDIA RELEASE posted by the University of the Highlands and Islands. You too can post media releases (aka press releases) on allmediascotland.com. For more information, email here.