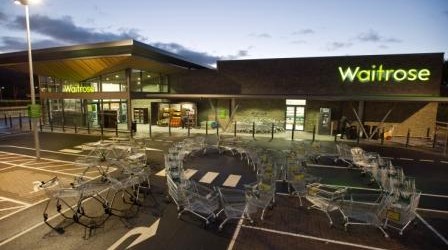 WAITROSE Helensburgh opened its doors to customers in Helensburgh at 8am this morning (Thursday 24 October), becoming the 300th Waitrose in the UK and the sixth store in Scotland.

Customers queued from 7am to be among the first to shop at the store. The branch’s first customer was Kathleen Gorrie, who has lived in Helensburgh for 50 years. Kathleen received flowers and a bottle of champagne from Brian Murrie, the branch manager.

Councillor Vivien Dance said: “Helensburgh and Lomond residents are delighted that from today Helensburgh will be known as a Waitrose town, joining other communities across Scotland that will derive significant economic benefit from having a company such as Waitrose in their area.

“We welcome the 200 new jobs, the unique community involvement that Waitrose offers and the fact that this puts Helensburgh firmly on the map as an attractive shopping destination.

“Congratulations to all concerned in bringing this project to fruition and for delivering a successful outcome to the community’s determined campaign to welcome Waitrose to Helensburgh.”

Brian Murrie, branch manager, said: “The fact that Waitrose’s 300th branch has opened in Helensburgh is entirely down to the efforts of supporters including many local residents and business owners.

“We’re looking forward to working with our fellow traders to promote and enhance Helensburgh and we’re excited about becoming part of the local community.

“Through our Community Matters scheme we’ll be donating £1,000 each month to three local charities and good causes. Our first month’s charities are SSAFA, which supports members of the armed forces and their families; the community space, Centre81 and Parklands Primary School.”

Waitrose is growing steadily in Scotland. Helensburgh is its sixth branch; Waitrose Milngavie is expected to be built during 2014 and plans were recently announced for an eighth branch in Ayr.

3. Waitrose is part of the John Lewis Partnership. Unlike other major supermarkets, Waitrose isn’t owned by shareholders and the City, but by its employees, the Partners.

4. Partners enjoy a range of benefits, such as the annual bonus, pension scheme and discount. Find out more here: http://www.johnlewispartnership.co.uk/work/pay-and-benefits.html