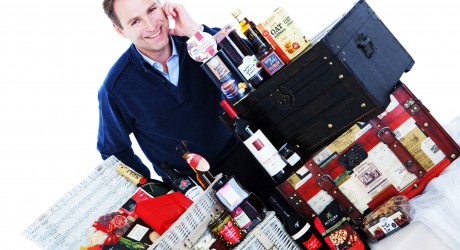 AN Aberdeen-based food and drink gift hamper company has reached the finals of prestigious UK business awards for entrepreneurs.

Highland Fayre, which also has an office in Perth, is a finalist in the Great British Entrepreneur Awards, in the Export Entrepreneur of the Year category. The inaugural awards mark a new era for entrepreneurship in the UK, acknowledging the contribution and inspiration provided by entrepreneurial businesses.

The specialist food and drink hamper supplier, which was set up in 1985 by the England family, supplies bespoke hampers to a number of top names in the oil and gas industry in the North-east, and corporate clients throughout the UK. In recent years, the company has seen growth in business overseas, and currently ships traditional British hampers to 25 countries.

The company, which employs 11 full-time employees, and 25 part-time seasonal workers, faces competition from eight other finalists in the category.

Managing director of Highland Fayre, David England, said: “It is an honour to reach the finals of the awards as it gives us great recognition for the work we are doing overseas. It is a new area of business for us and we now have a Highland Fayre distributor reselling our hampers abroad.

“The UK hamper market is highly competitive, and being able to diversify by selling our products internationally will help us build the business. Winning the award would not only give the business the recognition it deserves, but it would also reward the team who work here, as their hard work has enabled us to break into business overseas.”

Simon Burton, founder of the Great British Entrepreneur Awards, said: “The entries we have received for the Great British Entrepreneur Awards can only be described as awe inspiring. The quality has been outstanding. The judges have had the extremely difficult task of whittling the great and good of the entrepreneurial community down to the very best and we are delighted by the 91 companies that have made the shortlist.”