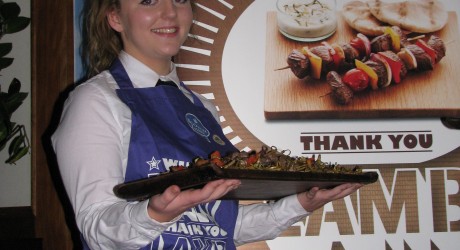 SCOTCH Lamb was high profile on Saturday at the Sunday Mail Great Scot Awards, which celebrated the achievements of unsung heroes and community champions from throughout Scotland.

Numerous VIPs were among the 700 guests who attended the awards ceremony in Glasgow which kicked off with a sampling of Scotch Lamb dishes from Quality Meat Scotland’s Wham Bam Thank You Lamb campaign, which highlights how easy it is to cook simple, quick lamb dishes.

Scotch Beef rib-eye steak was the centrepiece later on at the star-studded dinner in the Thistle Hotel, Glasgow on Saturday hosted by one of Scotland’s favourite comedians, Kevin Bridges, and BBC Scotland news presenter, Jackie Bird.

The pair, who are very keen cooks and were quick to point out they are huge fans of Scotch Lamb, have become synonymous with traditional Scottish shindigs – and have been helping Scots bring in the New Year for two decades.

Their work with young artists and composers is making sure their passion and talent will be heard in Scotland’s homegrown music for generations to come. Phil, who is artistic director of Scottish music at the Royal Conservatoire of Scotland, said they were “over the moon” to receive the award.

QMS asked the Scottish Association of Young Farmers Clubs, this year celebrating its 75th  anniversary, to nominate a member to attend the event and unveil the Lifetime Achievement winner.

Kirsty Morton, a member of Stirling, Strathkelvin and Strathendrick YFC and second-year student at Oatridge College, was delighted to do the honours.

Kirsty, whose family farm at Lochend, near Stirling, and fellow young farmer Kim McLaren, also had the opportunity to meet with several well-known faces during the evening.

Among these was Jahmene Douglas who rose to the occasion with a stunning impromptu vocal performance, when Shane Filan, formerly of Irish boy band Westlife, was forced to cancel due to illness.

The Scotch Lamb logo formed the backdrop to the Lifetime Achievement presentation when Carol McLaren, QMS head of Communications, also took to the stage and reminded the audience of what the label stands for in terms of quality assurance, traceability and animal health and welfare.

“The awards ceremony was a fantastic opportunity to let Scotch lamb shine and a great opportunity to tell such a high-profile audience, including the likes of Duncan Bannatyne and Judy Murray, about the pride Scottish farmers take in producing top quality lamb,” said Ms McLaren.

Scotch Lamb recipe leaflets were given to every guest who attended and the programme also featured a creative and recipe from the “Wham Bam” campaign.

Caption: Samples of Scotch Lamb dishes from the recent QMS Wham Bam Thank You Lamb campaign were enjoyed by 700 guests who attended the awards.