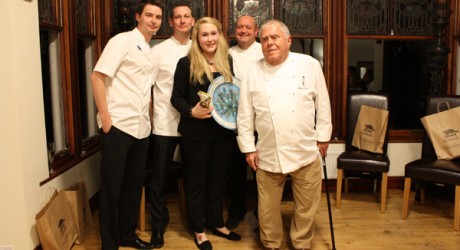 A CHEF from Inverness has been named as the Young Highland Chef of 2013. Eighteen year-old Victoria Edwards beat off competition from eight other finalists to win the title at Monday’s cook-off, held at the Burghfield House Hotel in Dornoch.

Victoria was selected as the winner of the title by a panel of expert judges led by internationally renowned chef Albert Roux OBE KFO. The other chefs on the panel were Steven Docherty of The First Floor Café in Windermere, Glen Watson of The Belfry in Sutton Coldfield and Derek Johnstone from Chez Roux at the Greywalls Hotel in East Lothian.

Victoria will be awarded with a week’s work experience at the Roux family’s two Michelin starred restaurant Le Gavroche in London, £500 and a trophy.

Entrants aged between 18 and 30 were invited to submit a three-course dinner menu for two with scallops in the starter, lamb in the main and pear in the sweet, with a budget of £15 per cover. Eight applicants who were judged to have come up with the best menus on paper went on to cook their dishes at the final.

Victoria, who is a chef de partie at Buncrew House Hotel near Inverness, was judged to have produced the winning meal.

Her starter was ginger and sesame seed breaded scallops with tomato jelly, coriander purée, scallop potatoes and a tomato chilli and lime salsa, her main was rack of lamb with lambs livers, black olive gnocchi, pepper and red onion Savoy cabbage parcels and a rosemary and port jus. She finished cook-off with a pear tarte tatin with white chocolate and Stilton ice cream.

Michal Buczkowski (30) from Skibo Castle near Dornoch came second in the competition, winning £250 and a week’s work experience at The RAC Club in London. Katie McFarland-Slack (24) from the Ivy Room in Ballachulish took the third spot, receiving £100.

Speaking about her win, Victoria said: “It felt amazing when I heard my name, it was a total shock! I wasn’t expecting it as I’d seen what some of the other entrants had made.

“I started out when I worked at the Hotel as a kitchen porter and they needed help for a wedding. I fell in love with cooking because of the buzz during the service and the skills you have to learn.

“This will give me more confidence and will be something I’ll be proud to put on my C.V. One day I want to own my own restaurant and become one of the best.”

Russell Rekhy, Burghfield campus manager, added: “It was an honour for Burghfield House Hotel to be involved in the Young Highland Chef competition once again this year. It is an opportunity for us to showcase some of the fantastic talent in our region as well as our training hotel, which serves one of the region’s key industries.”

“We work really hard to showcase the best of the Highlands larder with our Mey Selections produce and it’s been wonderful to see it used by the very best local talent. We look forward to Victoria acting as an ambassador for the area and wish her all our congratulations.”

Other finalists in the competition were Craig John Brown from the Ulbster Arms Hotel in Halkirk, Thomas Wright from the Coul House Hotel in Contin, Ryan Martin from Duchally Country Estate near Auchterarder, Martin Cerny from Applecross Walled Garden and James Macrae from Skibo Castle.

Burghfield House is run as a training hotel by North Highland College UHI, part of the University of the Highlands and Islands. It offers a range of courses in hospitality and cookery, including a tourism and hospitality honours degree. Students can also study for Scottish vocational and higher national qualifications there.

University of the Highlands and Islands · Food · Scotland-wide