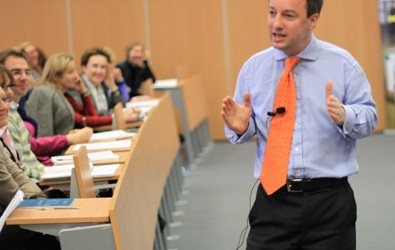 THE MD of an Aberdeen-based oil and gas consultancy is to address the psychology of leadership at a business breakfast in the city.

Professor Jonathan Passmore, who is the managing director of Westhill-headquartered Embrion Limited, will explore a number of issues related to the psychology of effective leadership.

These include the concept of emotional intelligence, the key skills behind good leadership, and how leaders can become more successful motivators, negotiators and influencers.

Embrion delivers specifically tailored training packages to clients across the North-east, using the science of psychology to improve various aspects of business performance, including leadership, professional development and health and safety.

Internationally respected, Professor Passmore has written a book on leadership skills and organisational change in the workplace, which was published earlier this year, and regularly speaks to audiences around the world.

The breakfast is being hosted by the Aberdeen and Grampian Chamber of Commerce, which represents more than 1,200 businesses across the North-east, and takes place at the Thistle Hotel, Aberdeen Airport, on 7 November. A number of other speakers will also address the event, including managing director of Keenan Recycling, Grant Keenan.

Speaking ahead of the breakfast, Professor Passmore said: “The psychological aspect of effective leadership is a powerful one which can often go ignored, but harnessing various techniques of positive psychology can significantly benefit not only leaders, but entire businesses from top to bottom.

“Whether it is managing change or bringing staff and colleagues around to a specific viewpoint, positive psychology and evidenced based practice can be integral tools in winning both hearts and minds.”

Aberdeen and Grampian Chamber of Commerce membership director, Liam Smyth, said “The chamber’s business breakfasts have a track record in attracting the interest and attention of executives from the North-east business community.

“A large part of this can be attributed to the high calibre of our speakers and their ability to examine the same topic from very different angles. This leadership breakfast is no exception and we look forward to welcoming Professor Passmore.”