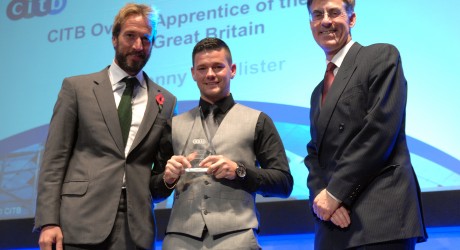 AN East Kilbride-based plasterer has been named the UK’s best apprentice at this year’s inaugural CITB Managing Agency Apprenticeship Awards.

Kenny McAllister, of the town’s Bryan Mac Plastering, scooped the Apprentice of the Year Scotland title, before landing the CITB’s prestigious Overall Apprentice of the Year prize. Beating off stiff competition from across Scotland, England and Wales, Kenny received his awards during a ceremony at the IndigO2 Arena in London.

Kenny, who is now fully-qualified, was commended for his ability to consistently produce exceptionally high standards of both theory and practical work throughout his apprenticeship.

He also received plaudits for his skills in the specialist area of cornice and ornamental work, while his involvement in national and international competitions was also highlighted.

As well as college lecturers and colleagues, Kenny has worked very closely with his CITB Apprenticeship Officer, Sian Mathews, who has overseen his development throughout his four-year training programme.

Other Scottish winners on the night included: Stephanie Wright of Aberdeen City Council who walked away with the Outstanding Personal Achievement Scotland award; Ellon-based Scotia Homes Ltd which was named Scotland’s Managing Agency Apprentice Employer of the Year; and Rheanna Urquhart, of Global Infrastructure in Muir of Ord, Ross-shire, and Scott Cunningham, of Girvan-based Cunningham Roofing Contractors, who were worthy runners-up to Kenny in the Apprentice of the Year Scotland category.

Speaking of his awards, which were presented by TV personality, Ben Fogle, Kenny said: “I was thrilled just to have been nominated, but never really expected to win, so I was pretty shocked to hear my name called out for both the Scottish and UK awards.

“I’m absolutely delighted of course, especially when there were so many other talented young professionals on the shortlist.

“I really enjoyed my apprenticeship and would like to thank everyone at CITB, including Sian my Apprenticeship Officer, and Bryan Mac for all their support and advice during that time.

“I learned so much when I was training and the opportunity to earn a wage at the same time was a massive bonus so I’d encourage anyone thinking about an apprenticeship to give it a go.”

Graeme Ogilvy, director of CITB Scotland, said: “The Managing Agency Apprenticeship Awards are a fantastic opportunity to celebrate the hard work and achievements of CITB apprentices across the country.

“The industry offers outstanding career prospects and we strive to deliver excellent apprenticeships that meet the needs of both employers and those in training.

“I’m delighted for all the businesses and apprentices recognised at this year’s awards, which were a perfect showcase for the exceptional talent we’re producing in Scotland and across the UK.

“Apprenticeships have an important role in the industry and we hope these examples of individual and partnership success will demonstrate their value.”

The CITB Managing Agency Apprenticeship Awards were launched to celebrate the achievements of CITB apprentices and those supporting CITB in providing them.

CITB is considered the largest provider of construction apprenticeships in the UK, giving thousands of young people every year the opportunity to enter the construction industry, whilst allowing employers to grow their businesses.

Issued by The BIG Partnership on behalf of CITB.

Duncan Fisher at The BIG Partnership on 0141 333 9585 duncan.fisher@bigpartnership.co.uk

Grant Thomson at The BIG Partnership on 0141 333 9585 grant.thomson@bigpartnership.co.uk

CITB is the Industrial Training Board (ITB) for the construction industry in Great Britain (Scotland, England and Wales). We are working to ensure that construction employers have the right skills, in right place, at the right time by investing funds and providing a wide range of industry-led skills and training solutions.

We are also a partner in ConstructionSkills, the Sector Skills Council (SSC) for the UK construction industry, and we are raising employer engagement in training, providing labour market insights on future skills needs and developing standards and qualifications for the sector. For more details on our work please visit: www.citb.co.uk.