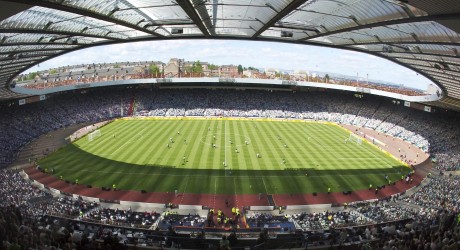 A HALL of fame ceremony to honour footballing greats is to be held at the home of Scottish football for the first time.

The annual Scottish Football Hall of Fame Dinner sees giants of the game inducted during an event for specially-invited guests from the sport.

For the first time since the event was launched in 2004, this weekend’s dinner and ceremony will take place in the national stadium at Hampden Park.

Delighted hospitality bosses at Hampden Park say it is fitting the ceremony is ‘coming home’ – since the Hall of Fame itself forms part of the Scottish Football Museum at Hampden.

Sodexo Prestige already provides award-winning match day corporate hospitality at the stadium and has helped create an impressive business in conferences and events well beyond the playing season.

Jane Thomson, sales and revenue manager with Sodexo Prestige at Hampden, said: “This is without a doubt the home of the game in Scotland, so it is hugely fitting that the Hall of Fame dinner is now coming to what feels like its rightful place.

“We have catered for many special events at Hampden but this feels like a particular honour for everyone involved here at the stadium.

“It has the air of a homecoming. The five-star Scottish Football Museum and its Hall of Fame are already a huge hit with our visitors.

“To hold the ceremony here ‘completes the circle’ and our team will be doing everything to make sure it is a memorable event for everyone involved.

“We’ve been working extremely hard designing a menu that would match such a prestigious event and  we ‘re looking forward to welcoming all the guests and newly inducted Hall of Fame legends to enjoy delicious food, excellent service and a special atmosphere.”

The evening will kick off with a champagne reception in the Scottish Football Museum and Hall of Fame followed by a rare photo opportunity alongside the Scottish Cup.

Staff will then serve the host of football legends, including Joe Jordan, a formal three-course meal in the Nevis Suite. The distinctively Scottish menu has been put together with the Sodexo Prestige commitment to use local, sustainable and in-season produce.

Following the meal, Scottish sports presenter, Dougie Donnelly, the evening’s host, will then announce all the new inductees who will take pride of place in the Hall of Fame.

Dougie will then be joined on stage by a number of football legends including Joe Jordan, to discuss the highs and lows of their careers. Former guests to these intimate interviews have included Sir Alex Ferguson and Graeme Souness.

Jane added: “Our team has been working tirelessly to ensure every detail is taken care of on the big night. Despite all the special touches we will be adding to the event, the evening is all about paying tribute to legendary players and celebrating all that is great about Scottish football.

“We can’t wait to now see which legends will next appear in the Hall of Fame.”

The stadium has 42 flexible suites which can accommodate events from intimate boardroom meetings in executive boxes to a 600 delegate capacity conference arena. It also offers fully air conditioned exhibition suites with room for up to 60 stands and the Millennium Suite can accommodate banquets from ten up to 120 guests.

Sodexo Prestige is the corporate dining, hospitality and events division of Sodexo and partners with 17 top-class venues in Scotland – and 50 across the UK – including Hampden Park, where it employs 21 full-time staff.

Other partners include Royal Botanic Garden Edinburgh and Hamilton Park Racecourse, while it also provides catering hospitality for The Open Championship, one of the world’s biggest golfing events.