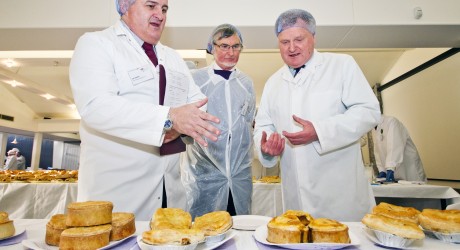 SCOTLAND’S top crust butchers and bakers will be arriving in force in Dunfermline this week as they deliver their best products into the hands of the judges of the 15th World Scotch Pie Championships which will take place at Carnegie Conference Centre, Halbeath Road, Dunfermline, KY11 8DY on Wednesday 13th November 2013.

This year’s competition, run by the Scotch Pie Club, will see the best businesses in the land deliver their pies, pasties and bridies to the Carnegie Conference Centre where they will battle it out for pie supremacy.

In addition to Scotch pies, contestants will be entering their best sausage rolls, speciality savouries, Scottish football pie and savouries. And for the first time in the history of the competition the judges have been able to indulge their sweeter nature with the addition of a new category – the best apple pie.

And a special guest judge will be joining head judge, Robert Ross, and his team on Wednesday 13th November.

Bay City Rollers front man, Les McKeown, will take up the difficult task as guest pie tester. Les said: “I was honoured to be asked to join the panel of judges for this iconic competition. The Scotch Pie is an icon and is something I look forward to coming home to, so in this category in particular we are looking for something really special that stands out from the crowd.”

The World Scotch Pie Championships provides butchers and bakers across Scotland with the opportunity to become recognised as producing the highest quality savoury products with awards given to those producing the best products in each category. The winner of the Scotch Pie category will be declared as the WORLD CHAMPION in January 2014.

The competition, which has run for 15 years, aims to highlight bakers and butchers that create top quality artisan pastry products. The competition is designed to both reward excellence and challenge the industry to raise the bar.