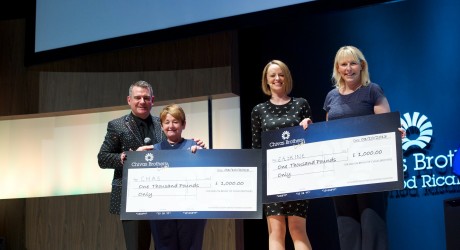 SCOTCH whisky producer, Chivas Brothers, is to donate £1,000 each to local charities Erskine and CHAS, following an employee competition at its annual roadshow.

The Chivas Brothers Employee Roadshow takes place each year in October, with events held at the SECC in Glasgow for all Paisley, Dunbartonshire, Glasgow, Ayrshire, London and Plymouth based employees; and at The Glenlivet distillery for Northern Scottish employees.

As part of this year’s show, warm up act Andy Collins invited the audience to take part in a series of musical challenges, with each half of the room competing to win £1,000 for one of the two charities.

Employees were asked to sing along to pop hits and songs from the musicals, as well as performing dance moves, with points going to the best team in a series of rounds. In the end, the company decided that both halves of the room had put on such a great show that it should be declared a draw – meaning a £1,000 cheque for each of the good causes.

Suzanne Roach, internal communications manager for Chivas Brothers, said: “Our employees make an incredible effort every year to fundraise for local charities, so at this year’s roadshow we decided to support this effort by including charitable giving as part of our event. The two charities were chosen because they are close to our employees hearts in this region.”

Sara Bannerman, head of fundraising at Erskine, said: “Chivas Brothers employees have done a wonderful job in raising this substantial sum – and they clearly did it with great gusto and style! Their support will help us to continue to care for Erskine’s veterans, and is a wonderful way to show appreciation for the enormous contribution our service men and women have made.”

Samantha Reilly, fundraiser at CHAS, added: “Memories being created, support being provided and families spending quality time together is all made possible by donations like these. Chivas Brothers have continuously shown their support to CHAS over the years, so it is wonderful to hear we were yet again in their thoughts while they were having so much fun at the roadshow.”

The Chivas Brothers Employee Roadshow at the SECC is attended by 1,200 employees. It is an opportunity for the company to gather almost its entire workforce in one place, updating them about achievements, developments and key events from the past year, as well as setting out the strategy and challenges for the year ahead.

This year’s roadshow was particularly special, as it was the first for new Chivas Brothers chair and CEO, Laurent Lacassagne, who joined in July.