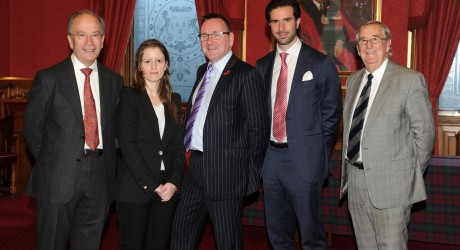 THE Aberdeen oil and gas community were shown the huge economic potential of Israel’s energy sector in a landmark briefing this week at a ‘Lunch and Learn’ hosted by Aberdeen City Council and chaired by the Aberdeen Chamber of Commerce.

Mrs Michal Franco Kedmi, a former senior advisor from the Israeli Ministry of Energy and Water Resources, spoke to over 40 delegates about the extensive economic promise that strategic partnerships hold for Aberdeen-based companies.

Mrs Kedmi, who was instrumental in the development of the Israeli government’s policy on natural gas exports, was invited by Universal Oil and Gas, (UOG), to address the Aberdeen audience, ahead of the first major oil and gas conference ever to take place in Israel, scheduled for November 2014.

She said: “Recent discoveries have guaranteed Israel’s energy independence for years to come and it is now on the threshold of becoming a major regional player in the energy market.

“This was an exciting opportunity for me to be able to address the Aberdeen business community and share how closer oil and gas links could pave the way for mutual prospects alongside achieving Israeli energy security.

“Israel’s entry to the oil and gas market also encompasses the potential to harness the ‘start-up nation’s’ talent to develop innovative technologies and promote its exchange that could influence production around the world.”

UOG’s chief operating officer, Joshual Beagelman, added: “There are already a number of international companies invested in Israel’s energy sector, but we expect the uptake to grow considerably.

“With the right kind of business development, Israel could rival Qatar and Saudi Arabia in the energy production league. Experts are already calling this the New Dawn.”

The event, chaired by Liam Smyth of Aberdeen & Grampian Chamber of Commerce, was held at The Town House Aberdeen, on Tuesday the 12th November.

The Aberdeen-Israel ‘Lunch and Learn’ formed one of a series of events taking place in the US, UK and Norway throughout 2014, to underline the opportunities opening up on this new production frontier.