Media Release: The panto cast have arrived… Oh yes they have! 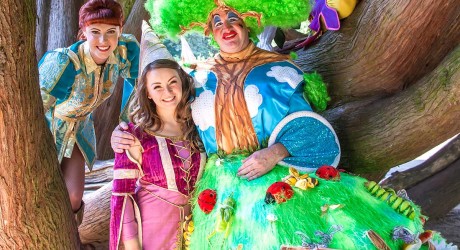 THE temperature has dropped, the John Lewis ad is bringing a smile to our faces, lots of coloured lights are appearing everywhere – it can mean only one thing (well apart from Christmas that is) … the PANTO SEASON is here!

It will be everything Eden Court audiences have come to expect of  the panto – a great story, lots of hilarious comedy slapstick, romance, adventure (including a rather large dragon!) and plenty of song and dance routines guaranteed to get your toes tapping.

The cast and creative team have arrived atthevenue and are busily working away in rehearsals.

Steven Wren, director of the show, says: “Although normally I wing things all the time, with such a big production I have to be organised.

“I’m responsible for eight actors, six dancers, three in the band, 24 kids and 15 crew which is an awful lot of people and we only have two weeks in which to be ready.

“We’ll spend the first week in the rehearsal rooms and then the second week we will move into the auditorium for what we call Tech Week, when we start running through things on the stage as well as bringing in all the lighting and sound as well as our fabulous band.”

Steve Boden, managing director of Imagine Theatre, who are producing the pantomime, says: “I don’t think most people realise all the work that needs to take place before the show starts – the show has been in preparation since before we finished Mother Goose last year – people may think panto is just for Christmas, but for us at Imagine it is a year-round job.

Rehearsals are the time when all the work that has taken place over the last year comes together and the result is the fabulous show you will see on stage.”

One of th emain challenges for Greg Powrie who is playingthelarger than life nanny Knot is to practice getting all his costume changes done in time!

Greg says: “Dame is a great character to play but as Nanny Knot I have at least eight costume changes during the show which will be exhausting, particularly as they are all quite tricky to get in and out of, but it is worth it to hear the laughter from the audience when they see each elaborate outfit.”

Don’t get caught napping – tickets for Sleeping Beauty are on sale now and are selling really well. For more information call the Eden Court box office on 01463 234 234 or visit the website www.eden-court.co.uk