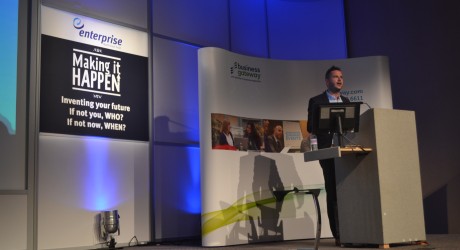 UNIVERSITY, college and school students joined business owners and budding entrepreneurs for one of the North-east’s biggest enterprising conferences this week (Wednesday 20 September).

Four inspiring speakers, including a finalist from this year’s The Apprentice, engaged an audience of over 500 delegates during the Enterprise North East Trust (Enterprise) ‘Making It Happen’ conference at the AECCC, highlighting self-employment opportunities in the North-east.

Neil Clough, who reached the final five candidates on The Apprentice, joined owner of Regis Banqueting Catering Services, Ryan Longmuir, and founder of the Scottish Business Awards, Josh Littlejohn, to give talks throughout the event.

Audience polls were also taken during the conference, with 80% of the audience confirming they would be confident to start a business in 2014.

Results also highlighted that 65 per cent of the audience considered £500 to be enough capital to start a business in the current climate, and 75 per cent would consider starting a not-for-profit business to help society.

Gary McEwan, chief executive of Enterprise, said: “We were delighted to be able to present such inspiring and engaging speakers, and we hope their talks motivated the audience.

“The figures from the polls are highly positive and prove there are many aspiring entrepreneurs in the area.

“We hope the conference has given them inspiration for their future in the world of either employment or self employment.”

Lord Provost of Aberdeen, councillor George Adam, who also addressed the audience at the event said: “Aberdeen is the most entrepreneurial city in Scotland, and is a great place to follow the path of becoming an entrepreneur.

“This ‘Making it Happen’ conference is a great event for aspiring entrepreneurs to learn about and identify the opportunities available to them in Aberdeen to follow their passions to start a business.

“Enterprise North East Trust and their supporting partners at this event exist exactly to support these ambitions which makes this event so important.”