Media Release: North-east boutique is star of the show at national industry awards 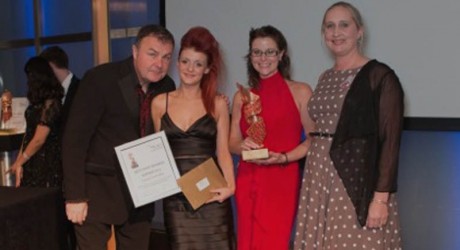 AN Aberdeenshire  lingerie boutique is celebrating winning a prestigious accolade at a national retail awards ceremony in London.

De-Zire lingerie boutique, based in Inverurie, was the only Scottish winner at this year’s Stars: Underlines Best Shop Awards, successfully measuring up against 13 other retailers from across the UK and Ireland to secure the Best Personal Touch Shop Award.

The accolade is very fitting for the lingerie boutique, which was launched by North-east businesswoman, Susan Evans, in 2008, as it specifically focuses on the level of customer loyalty and personal one-to-one service given to customers, as well as the personality, professionalism and expertise of the owners.

The UK wide independent retail awards, which received more than 300 nominations this year, is now in its fifth year, and recognises the best intimate apparel, swimwear and legwear retailers across the UK and Ireland.

De-Zire is now one of the only independent lingerie boutiques in the North-east, supplying quality and affordable lingerie brands for over five years.

Since opening the boutique, Susan and her team has been dedicated to providing outstanding customer service and education to change the attitudes of woman and young girls towards lingerie shopping.

Owner of De-Zire, Susan Evans, said: “Winning the Stars Best Personal Touch Award is such an honour for De-Zire.

“It really is the best accolade that we could receive, as I am so passionate about going the extra mile for my customers by offering little personal touches to each customer that walks through the door.

“To be acknowledged in front of the very best in the industry is overwhelming and fantastic, as it shows my hard work and determination to offer the North-east an education about lingerie and the benefits of a correctly fitting bra have all been worth it.”

Co-ordinator of Stars: Best Shop Awards, Pamela Stars, said: “This year was the largest ever Stars Awards, with over 260 guests from all over the UK and Ireland.

“From the 380 nominated stores, shops and e-commerce sites, there were only 81 finalists and 11 winners so this award is a real achievement for De-Zire.”

Susan, who is a qualified bra fitter, works tirelessly to change attitude of woman and young girls towards lingerie shopping.