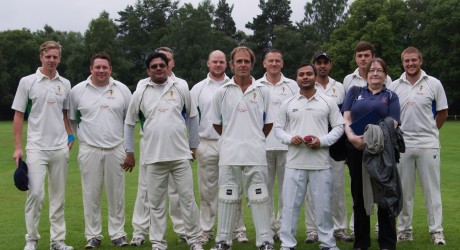 A GARIOCH cricket team sponsored by Aberdeen-based oil and gas service company, Centrifuges Un-Limited, is celebrating the end of its best ever season.

The company’s long-standing support of Kemnay Cricket Club has, in recent years, helped boost the club from a side with an uncertain future to promotion to Grade 3.

The club also successfully swelled the ranks across all age groups and, by the end of last year, had over 50 registered players and two competing teams.

The 1st XI lost just one game all season to finish second in the league and win the Reid Cup – the first trophy under the Centrifuges Un-Limited’s sponsorship.

The 2nd XI also showed great improvement, reaching the semi-final of their respective cup before narrowly missing out.

Kemnay/Kintore Cricket Club First XI captain, Liam Thom, explained: “The continued sponsorship from Centrifuges Un-Limited allows us to purchase kit for the younger and future players and this season we also had a weekly sessions with a professional coach – something that players young and old benefited from, as the results showed!

Jim Shiach added: “We are delighted that we have been able to play a part in the success of the very talented teams at Kemnay/Kintore Cricket Club.

“We believe it is very important for young people to be able to play and develop their sport locally so we are pleased to support the club in making that happen in Aberdeenshire.”

Key markets include Norway, Egypt, Brazil, the Middle East and North Africa as well as the UK, and clients include major operators, drilling contractors and waste management companies.