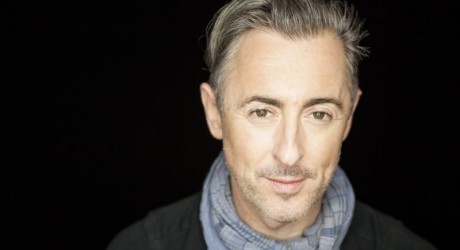 Staff at The Birks Cinema in Aberfeldy are hard at work polishing the glasses, and making sure the Cinema lives up to its Hollywood connections.

“This is a once-in-a-lifetime opportunity for a small Highland cinema so we’re going to town. We have support from our local distillery, Dewars, which is bringing in its world-class expertise to mix the cocktails for our guests, our chef is hard at work preparing the menu for the canapés and our uniforms have been ironed within an inch of their life.

“To say there was an air of excitement this week would be an understatement!”

Alan will be accompanied on the evening by his husband, Grant Shaffer, a well-known graphic artist and illustrator; Scotland’s Machar and playwright, Liz Lochhead, who was appointed the National Poet for Scotland in 2011; and veteran Scottish actor, Ralph Riach, who became a household name after starring in the BBC drama, Hamish Macbeth.

The black tie event is a culmination of a landmark year for The Birks, opening its doors in April after lying empty for almost ten years, clocking up awards for its regeneration and securing itself a place on the shortlist for Scotland’s Building of the Year 2014.

Guests will start arriving on the red carpet from around 7.15pm, after the Christmas Lights have been switched on in the town centre.

“We are grateful for the support he has given the project over the past four years and we’re delighted to have him here to formally open the cinema. It is a fantastic reward after all the hard work everyone has put in.”

For more information on The Birks Cinema please visit www.birkscinema.co.uk

For further information on The Birks Cinema please contact Tricia Fox on 07989 955039 or t.fox@volpa.co.uk