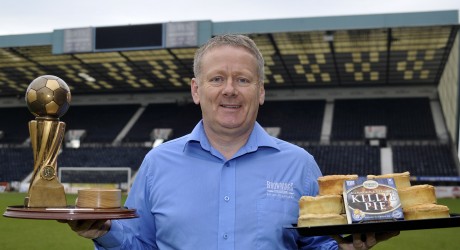 THE famous Killie Pie – from Brownings the Bakers – is officially the number one pie in Scottish football once again, after the football pie awards winner was announced.

Pies from 42 different football clubs were judged and Brownings are delighted that the Killie Pie has retained the number one spot.

“I’m ‘over the moon’ with this award as it shows what we have always known, in that our Killie Pie is the best-tasting in Scotland.

“Following the Killie Pie winning the best savoury product recently at the Scottish Baker of the Year Awards, we were quietly confident that the fans’ favourite would take top spot again.

“With so much doom and gloom stories emerging about Kilmarnock as a town, recently, it’s great to give the people in this area something to smile about.

“We have also redesigned the Killie Pie packaging to include the slogan, ‘Kilmarnock’s Famous Killie Pie’, in recognition of its home town and the fact that it’s a national product eaten throughout the UK in areas where the name, ‘Killie’, is not known.”

The World Scotch Pie Championships provides butchers and bakers across Scotland with the opportunity to become recognised for producing the highest quality savoury products with awards given to those producing the best products in each category.

The winner of the Scotch Pie category will be declared as the WORLD CHAMPION on 15th January 2014 at an awards lunch in Dunfermline.

Winners will be announced on 15th January at Carnegie Conference Centre in Dunfermline.

We aim to be an integral part of each member’s business by providing support for bakers of all sizes.

The Scottish Federation of Meat Traders is the trade organisation representing Scotland’s craft butchers. The 440-member shops are supported from its Perth base with help and advice. Members are encouraged to produce innovative and unique products that create compelling reasons to shop at specialist meat retailers.