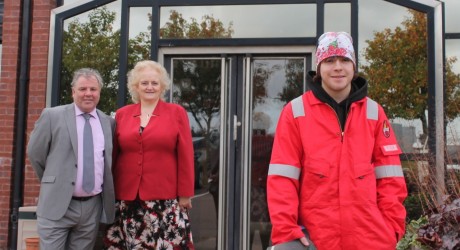 MANY youngsters don’t know what they want to do when they leave school and are faced with the hard decision of whether they should continue their studies or enter the world of work.

For teenagers who don’t want to enter in to further education, apprenticeships offer the perfect opportunity to learn a skill, gain a recognised qualification and earn a wage all at the same time.

The importance of apprenticeships was highlighted by North-east youngster, Kevin Wilson, 21, who reached the finals of the Skills Development Scotland Modern Apprenticeship Awards 2013 recently.

After leaving school, Kevin, made the decision to join Aberdeen apprenticeship training company, ITCA Training, and began his career through the Get Ready for Work programme.

ITCA, which is one of the largest engineering apprenticeship-training firms in Scotland, provides training for young employees in sectors including, welding, fabrication, mechanical engineering, business administration and logistics.

The training firm secured Mr Wilson a work placement with Dyce-based company Caledonian Petroleum Services (CPS) after he displayed a strong interest in welding.  After successfully completing the initial programme at ITCA, he secured a full-time position with the firm.

CPS utilises the programme to give young people an opportunity to kick-start a career within the oil and gas, welding and fabrication industry.

Mr Wilson’s success in reaching the finals of the prestigious awards recognised his drive, determination and resilience to overcome dyslexia to succeed in his discipline.

June Jones, ITCA managing director, said: “Kevin is an ambassador for ITCA Training, CPS, and the future of the welding industry. He is a learner who, in future, will nurture the skills of the next generation of apprentices and pass on his skills, knowledge and experience to them.”

Bob Steel, managing director of CPS, said: “Although Kevin didn’t win the award we are extremely proud that he reached the finals. He used skills he learned during his time at ITCA and applied them to his role at CPS, and is continually praised. His recent contribution to the firm was successfully passing his titanium welding coding test, a very specialised division within the welding industry, which is a huge benefit to CPS. He really is a great asset to the company.”

Issued by Frasermedia Ltd on behalf of ITCA