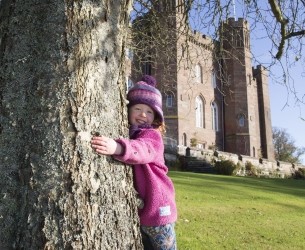 It has, however, fallen just 20 huggers short of a record claim still pending by the state of Oregon.

Ten locations spanning the length and breadth of Scotland took part in the national attempt to set a new world record for Tree Hugging to launch Scotland’s new Tree Trail which features a group of Scotland’s finest tree collections which have both national and international importance, brought together as the National Tree Collections of Scotland.

Organisers had hoped that 1,000 people across Scotland would have joined hands to hug trees on Sunday and to trounce the USA’s recent attempt of 951 tree huggers that is yet to be formally recognised by Guinness World Records.

They are now considering whether to submit a counter claim for the record, on the basis that Oregon’s attempt has not yet been officially recognised.

“We’re delighted to have broken the official record but equally gutted that we’re just slightly short of the numbers Oregon are claiming they had. We are aware that Oregon had an online registration process for their attempt, and so there’s no guarantee that this accurately reflects how many tree huggers turned up on the day.

“We had a manual registration process at all sites so we are 100 per cent confident that our figures are correct. In fact it is actually possible that our figures may as yet be higher and we have put out an appeal on social media that if anyone did take part, and they did not sign the register, to let us know as soon as possible.”

Scotland’s tree hugging world record attempt marked the end of National Tree Week in the UK, as well as the Year of Natural Scotland, and the launch of Scotland’s Tree Trail. Organisers are now encouraging members of the public to consider adding ‘Become a Tree Trailer’ to their New Year’s Resolutions this year.

“We’ve had a magnificent response from members of Scotland’s Tree Trail and from the public to attend the Tree Hug. It’s clear that there is a lot of affection for Scotland’s magnificent trees out there, and the official Tree Trail passports are now available from all of the Tree Trail sites so if Munro bagging is out of reach for the whole family, Tree Trailing is definitely something everyone can do together.”

Passports are available at each of the Tree Trail locations.

A Bit about National Tree Collection of Scotland