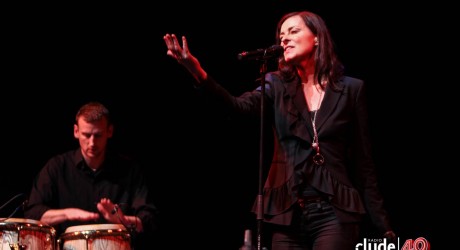 RADIO Clyde, in partnership with Glasgow Life, has held yet another exclusive music event to celebrate its 40th anniversary. The station welcomed 80’s icon, Lisa Stansfield, to perform in front of a select audience of competition winners and guests of the station at the iconic Old Fruitmarket in Glasgow’s merchant city.

Lisa, along with her stripped back three-piece band, played songs from her upcoming album ‘Seven’ as well as a couple of mega hits that have helped her sell 20 million albums worldwide.

Speaking to Clyde 2’s Gary Marshall, Lisa admitted that it has been a long awaited return to music after taking time to pursue acting roles.

Lisa said: “It feels great to be back performing to my fans and I’m so happy to be celebrating Clyde’s 40th birthday in such a beautiful venue. I have always had great support from Glasgow.”

The crowd was easily coaxed to its feet to dance to the last remaining numbers after a brief Q&A session half way through the set.  The Q&A session gave fans the chance to ask some questions which allowed Stansfield to showcase her humour and wit as well as share some stories from her long career. The Q&A was an added dimension to an already unusual and magical evening of entertainment.

The stunning Old Fruitmarket, in Glasgow’s merchant city area, provided the stunning backdrop for the performance, and at times threatened to steal the limelight from the fantastic talent on stage. Working in partnership with Glasgow Life has meant that Radio Clyde will be bringing other massive acts to more of Glasgow and the West’s most beautiful and iconic venues in 2014.

Councillor Archie Graham, chair of Glasgow Life, said: “We are delighted to be working in partnership with Radio Clyde to help the station celebrate its 40th anniversary. We already staged a unique show with Keane at Kelvingrove Art Gallery and Museum last month, which went down a storm with both the audience and the band.

“I had no doubt the Lisa Stansfield gig at The Old Fruitmarket would also be a fantastic show as the venue has traditionally been one of the city’s best-loved performance spaces.”

Radio Clyde will be announcing more Clyde 40 events in the coming months. Stay tuned to both stations to find out all the details.

A gallery of the pictures form the event can be found at clyde1.com and clyde2.com