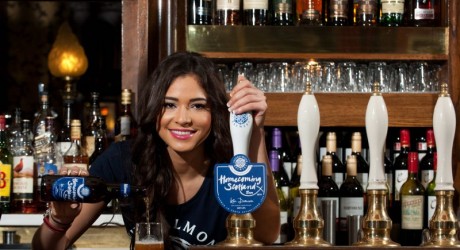 MISS Scotland, Jamey Bowers, raises a glass to mark the first delivery of Homecoming Scotland 2014 beer to the country’s capital, wetting the head of what will be a year-long celebration of hundreds of events with a commemorative craft beer that has been lovingly brewed in Scotland by Inveralmond Brewery.

Inveralmond Brewery, based in Perth, is the first Scottish business to lead the way in a dynamic partnership arrangement which will see the beer featured at key Homecoming Scotland 2014 events and catapult its already growing global reputation onto an international platform.

The beer, which has been developed by Inveralmond Brewery’s head brewer, Ken Duncan, is described as “an exuberant ale which displays berry sweetness on the palate and aromatic hoppiness, crafted to encapsulate the energy and presence of our incredible nation in 2014”.

Available in craft keg, cask and 330ml bottle, orders are currently flowing in from on and off trade customers across the country.

Gearing up to satisfy burgeoning market demand, Inveralmond Brewery has recently invested in more efficient production equipment and is looking to significantly increase production capacity over the short-term.

Export orders for Homecoming Scotland Beer have already been shipped to Italy and Sweden, and markets in Australia, New Zealand and the US have shown strong initial interest in the product.

The range of Inveralmond Brewery beers can now be found in most multiple retailers and exports its products to countries in continental Europe, Americas and Asia Pacific. The independent craft brewer employs 18 people, and their turnover hit £1.5m last year and is expected to grow in 2014.

“We are delighted to be partnering with Homecoming Scotland 2014 with our limited edition commemorative beer which we hope will be very popular with revellers over the Festive period.

“Opportunities like Homecoming Scotland 2014 give home grown Scottish companies genuine prominence on an international stage and we’re very proud to know that our beer will be showcased as one of Scotland’s premium export products at major events across the country.”

“The team at Inveralmond Brewery has truly embraced the power of partnership opportunities which next year will bring, not just for events, but also businesses and organisations.

“The creation of the dedicated Homecoming Scotland beer is a fantastic example of how businesses can pro-actively reap the rewards from being involved with 2014 – the year that Scotland welcomes the world.

“With Christmas and New Year just around the corner, it’s a perfect time to look out for the craft beer and toast the arrival of the second Year of Homecoming.”