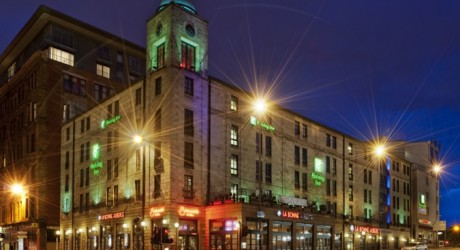 AS an official Celtic Connections venue – the only hotel in the city to secure such status – Holiday Inn Glasgow Theatreland is looking forward to welcoming visitors to the largest annual winter music festival of its kind and the UK’s premier celebration of Celtic music when it kicks off next week (Thursday 16th January).

As well as being the venue for The House of Song, hosted by Doris Rougvie from 10.30pm on five nights throughout the festival, the hotel will play host to a ukulele school with Finlay Allison over the weekend of 25th and 26th January 2014 from 11:00am till 4.30pm.

The AA rosette La Bonne Auberge brasserie at Holiday Inn has established itself as a favoured haunt of Celtic Connections performers and concert-goers over recent years.

And added attractions this year include La Bonne Auberge offering its own La Bonne Auberge beer – specially brewed by local supplier West – to quench the thirst of festival-goers whilst Glenfiddich is running a series of whisky tastings throughout the duration of the festival.

Alan Taylor, general manager at Holiday Inn Glasgow Theatreland, said: “Given our location at the heart of Glasgow’s Theatreland, and opposite fellow Celtic Connections venue Glasgow Royal Concert Hall, we have enjoyed a long association with the festival; but this year looks all set to be the busiest, biggest and best yet!

“Through our provision of accommodation for many of the artists performing at the festival, we have established a good relationship with many of the musicians, such as Phil Cunningham and Aly Bain, and our late night bar plays host to various musical collaborations and impromptu sessions throughout the festival.”

Donald Shaw, artistic director of Celtic Connections, said: “Once again we are delighted to be working with the fantastic Holiday Inn Glasgow Theatreland.

“Year-on-year, they provide comfortable accommodation for a number of the festival artists to relax in and you can be sure to enjoy some fantastic spontaneous sessions in their late night bar. We look forward to continue working with them for years to come.”

Glasgow’s annual folk, roots and world music festival, Celtic Connections celebrates Celtic music and its connections to cultures across the globe. Between 16th January – 2nd February 2014, 2,100 musicians from around the world will descend on Glasgow and bring the city to life for 18 days of concerts, ceilidhs, talks, art exhibitions, workshops, and free events.