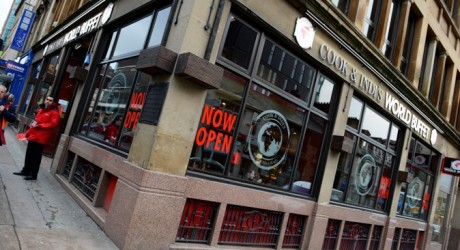 COOK and Indi’s World Buffet, the rapidly expanding restaurant chain, has opened its second outlet in Glasgow and expanded its offering with a Spanish and Mexican flavour.

Confirming that the West of Scotland, and Glasgow in particular, is rapidly developing a taste for its pioneering ‘world on a plate’ offering, the latest Cook and Indi’s World Buffet – the sixth in the fast-growing chain – caters for 140 diners, attracted by its range of different cuisines from around the world.

Located in the heart of the city centre on the corner of Renfield Street and Bath Street, with a variety of dishes ranging from pizza to pastas, starters to salads, sushi to noodles and pakoras to curries, Cook and Indi’s World Buffet offers seven different cuisines (Indian, Japanese, Sushi, Chinese, Italian, Spanish and Mexican) and over 100 dishes.

Cook Gill, co-founder of the restaurant, said: “We’re delighted to serve up our second revolutionary ‘world on a plate’ concept in Glasgow with a distinct Mexican twist.

“The idea behind our World Buffet is to bring together various cuisines from different parts of the world so that when families, friends and office parties are dining out there’s no need for an argument about which restaurant to go to because we offer food to suit everyone’s tastes!”