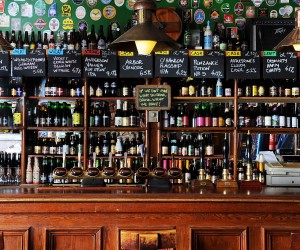 THE Anderson restaurant, with rooms in the Highland village of Fortrose, has collaborated with Cromarty Brewing Co. to brew a special Haggis Beer for Burns Supper on Saturday 25 January 2014.

The Anderson’s chef, Anne Anderson, will make an individual haggis for each diner on Burns Night.

Collaborating brewers, Jim Anderson and Craig Middleton, will use the dominant spices from her recipe – black pepper, mace, coriander and nutmeg – to spice a five per cent ABV red rye beer to match the haggis perfectly.

“Tempted as we were,” says Jim Anderson, “adding an entire haggis to a batch of beer is just wrong on many levels.”

Cromarty Brewing Co. head brewer, Craig Middleton, adds: “I wanted to serve it from a sheep’s stomach, but Jim didn’t want to be left holding the bag!”

The Anderson has arguably one of the most diverse and large collection of beers in Europe.

Passionate and extremely knowledgeable on the subject, Jim Anderson explains: “Cooking spices were used for thousands of years in virtually every beer recipe. This was the case until hops, with their unique preservative and bittering qualities, came into common use around the 13th century.

“Many of today’s microbreweries, however, are re-discovering the complexity that cooking spices can lend to a beer.”

Anderson and Middleton have already collaborated on several beers, including Peace Pipe (an IPA brewed with tobacco-smoked malt and maple syrup) and Chilly Chappy (a ‘high-octane’ pale ale made in the style of a German Eisbock).

The haggis beer, dubbed Chieftain, will be cask conditioned and served exclusively at The Anderson for one night only: Burns’ Night which, thankfully for many, falls on a Saturday this year.

It will be available in the Dining Room, Whisky Bar and Pub.