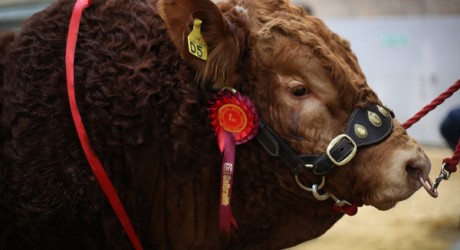 THE Cabinet Secretary for Rural Affairs is set to take part in a public question-and-answer session with farmers on the first day of the Stirling Bull Sales (Monday 3rd February).

Richard Lochhead MSP will be guest of honour at the national event, which runs from Monday 3rd February to Tuesday 4th February and continues on Monday 17th and Tuesday 18th February at Stirling Agricultural Centre.

As well as viewing the show and sale, Mr Lochhead will host a question and answer session on Monday afternoon, giving farmers attending the event the chance to ask him questions about key agricultural issues, including CAP reform.

The Spring Bull Sales will offer 1,004 pedigree bulls and females on show and sale over the two-week event. Run under the auspices of the breed societies, the Stirling Bull Sales are hosted by United Auctions and sponsored by Bank of Scotland.

A new feature introduced by the Aberdeen Angus Cattle Society this February is the Parade of Pairs of Bulls on Sunday 2nd, which aims to show off the stock and forms part of the buyers’ research in choosing the right bull at the sale on the following Tuesday.

And the new, condensed format in week one this year will provide a wide range of bulls for sale on a single day, improving the choice for buyers and helping save time and expense for buyers and exhibitors alike.

Said David Leggat, executive chair at UA: “The compact format in the first week will suit the buying public down to the ground. It’s not many agricultural shows that can offer access to 370 of the best pedigree bulls for sale in the country in one day.

“The Sales are a terrific forum for agriculture so we’re delighted to facilitate a Q&A with the minister for our customers and very pleased to welcome Provost of Stirling Mike Robbins as a special guest on Tuesday 4th February.”