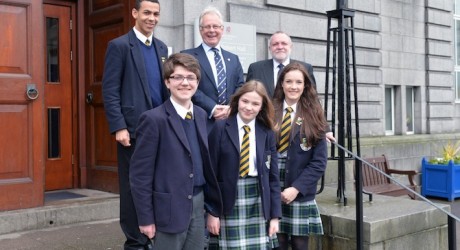 ROBERT Gordon’s College today launches a major fundraising campaign to realise its vision to create the largest new school teaching facility for science and technology in the UK.

To date, £1.5million has been raised to construct what is believed to be the largest new Science and Technology Centre at any school in Britain and it is hoped this public campaign will bring the total to £4million.

The full investment of £12million will see the new Science and Technology centre, incorporating 34 laboratories and workshops, open later this year alongside The Craig Centre for Performing Arts, which will enable pupils and the community to benefit from a modern performance and digital recording venue in the heart of Aberdeen.

Pupils using the Science and Technology Centre will have access to the latest facilities and modern teaching methods. These include: a laboratory for microbiological and molecular biological research, a dedicated instrument room to ensure best operation of sensitive analytical experiment equipment and the provision of digital devices as an integrated part of classroom activity.

Today’s event at Schoolhill, Aberdeen, to mark the beginning of the fundraising campaign, saw attendance from 300 current and former pupils and invited guests.

The main attraction was the creation of a scale model of an atom, whereby students of all ages, from four to 18, laid £1 donations, each representing 100 pennies, side by side in a line almost the length of Union Street (0.8 miles).

A real scale model would have to lay more than 100,000 pennies to demonstrate the tiny size of the atom’s centre, the nucleus, alone.

He explained: “This is fundamentally a commitment to pupils’ futures. A practical approach to science using real life scenarios motivates individuals and broadens their understanding of, and enthusiasm for, the curriculum.

“This building will support the rich curriculum at Robert Gordon’s College, which matches individuals’ formal education with the development of their personal and social skills, thereby creating well rounded future business leaders who will have a positive impact on the north-east and UK-wide economies.”

Chair of governors, professor Jimmy Hutchison, oversaw the launch of the public phase of the campaign.

He added: “By placing all the coins that we collect together, we will show that if everyone works together we can support a brilliant new Science and Technology Centre for the pupils of Robert Gordon’s College.

“We are hoping that the entire community of the school will feel that they are part of the new centre, one of the biggest developments in the history of Robert Gordon’s College.”

“This is the second part of a three phrase development, which started four years ago with the creation of the stunning new junior school.”

“The science centre and arts venue will play a significant part in fulfilling the ambitions of the boys and girls of the school – enabling them to be the best they can be.”

Individuals and businesses can donate to the campaign in a number of ways, including: buying a gift from £500 up to £50,000 that will transform how pupils learn, donating as little as £5 per month, joining the corporate partner programme or even organising their own fundraising event.

The third phase of the campus redevelopment will be next in the strategic vision of Robert Gordon’s College as the school delivers a modern sports centre and swimming pool.

MEDIA RELEASE issued by Robert Gordon’s College. You too can post media releases (aka press releases), on allmediascotland.com. Email here for more information.