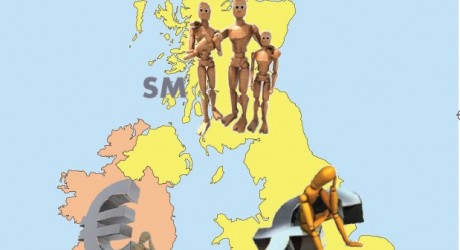 IN March 2016, the Scots may be electing their first sovereign Parliament since 1707.

Begins a spokesperson: “An early priority would be to decide upon the country’s Monetary Policy, principally the national currency and the nature of its banking system.

“Until that time, Scotland will continue to use Sterling irrespective of the composition of that new government or the agreement of Westminster.”

Launching on Wednesday, March 5 2014 at a YES Campaign meeting in Helensburgh, ‘Moving On’ is a new book advocating an independent currency  for Scotland.

The co-authors, a successful businessperson and a senior trade unionist combine to argue against the present neo-liberal economic dogma and its close association with what it considers to be shadowy financial markets.

The spokesperson adds: “‘Moving On’ is equally critical of democratically-elected governments which – in its view – cave in to lobbyists, bankers and financial engineers representing the City of London. Instead, the book offers a completely fresh constitutional formula isolating the currency from vested and political self-interest.

“Part Two sets out the brave and lonely case for change. Unusually, this is done in a remarkably realistic context – that of Scotland regaining its independence and setting about a 21st-century Enlightenment, reminiscent of that pioneering Scotsman, Adam Smith, rather than his countryman, James Paterson, who founded the Bank of England over 80 years previously.

“The comparison holds good today, that of the philosopher and social reformer, Adam Smith, and the alleged self-interest and short-term opportunism of Paterson.

“‘Moving On’ represents the first book to detail a practical and more exciting option to the present financial regime. That is sorely needed and as Dennis Canavan writes in the Foreword, will contribute significantly to that debate.”

The book will be available from Amazon from March 5 2014.

MEDIA RELEASE issued by Ronald Morrison. You too can post media releases (aka press releases), on allmediascotland.com. Email here for more information.