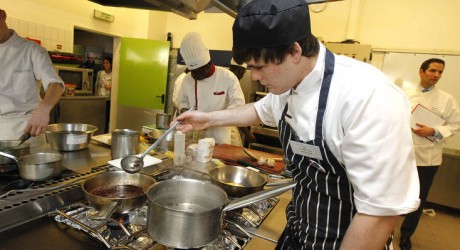 AN up-and-coming North-east chef has been recognised for his culinary excellence following a prestigious cooking competition in Paris.

Alan Clarke, who is senior chef de partie at the luxurious Mercure Aberdeen Ardoe House Hotel and Spa, on the outskirts of Aberdeen, represented the UK and Ireland at this year’s Professions Challenge, after triumphing at an earlier event in London.

The 22 year-old was deemed by a jury of three to have created the best main course after wowing judges with a breast of guinea fowl alongside a chanterelle spinach mousse.

Mr Clarke’s commendation is the latest boost for Ardoe, a 19th-century mansion house, which is situated in a picturesque setting surrounded by 30 acres of land, just three miles from the city centre.

The destination recently underwent an extensive refurbishment programme, including the transformation of the award-winning Blairs restaurant, reception area, drawing room, ballroom, and a number of function and bedroom suites.

Ardoe’s general manger, Peter Sangster, said: “Alan’s success is fantastic news for himself and the hotel’s reputation for excellence generally.

“He is an extremely talented young chef and it was hugely encouraging, although not at all surprising, to see him do so well in the Professions Challenge.

“Alan’s commendation showcases the talented staff that we have working at Ardoe and highlights the quality of cooking in our kitchen.

“Furthermore, we are committed to providing our staff with as many opportunities for professional development as possible and it is great to see this development recognised by professionals and peers from across the industry.”

Mr Clarke said: “The Professions Challenge was a fantastic opportunity for me to go to Paris and showcase my skills in front of some of the finest young chefs in Europe.

“The standard of cooking was exceptional, therefore I was delighted to gain a commendation from the judges and especially pleased when they informed me that I had cooked the competition’s best main course.

“Ultimately, my experiences have given me a renewed confidence and determination to get back in the kitchen and continue to provide the best possible experience for diners at Ardoe.”