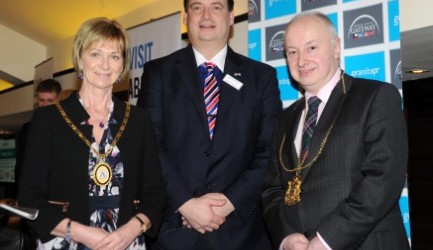 A TRANSATLANTIC audience of almost 400 enjoyed a session of knowledge-sharing and networking thanks to the second annual Aberdeen-Houston Gateway on Tuesday, March 4th.

In spite of the technological challenges posed by extreme weather conditions in Houston, the event has been hailed as a resounding success – and bookings have already been placed for 2015.

The event took the form of a breakfast at the Norris Conference Centers in Houston, video linked to a simultaneous lunch at the Marcliffe Hotel & Spa in Aberdeen. By linking two of the world’s leading energy hubs, the event provided a platform for sharing information and stimulating discussion as well as acting as a potential springboard for further business opportunities on both sides of the Atlantic.

Hosted by Granite PR, the event attracted a range of leading speakers and panellists whose presentations and question and answer session covered key industry themes including energy, education, training, the skills shortage and life sciences.

Commenting on the success of the 2014 event, Granite PR founder and managing director, Brett Jackson, said: “We are delighted with the success of this year’s event and we are particularly grateful to our Houston delegates who had to factor in a severe weather warning for the city. Many of them braved atrocious weather to attend the Aberdeen-Houston Gateway and we are very grateful to them.

“The growth of the Aberdeen-Houston Gateway is nothing short of astonishing. In 2013, we linked 70 delegates in Houston with 170 in Aberdeen – this year the figures grew to 150 in Houston and 270 in Aberdeen.”

He added: “Feedback on both sides of the Atlantic has been extremely positive and we now look forward to building on the success of this event by holding the inaugural Aberdeen-Stavanger Gateway on June 3rd and repeating the Aberdeen-Houston Gateway next year.”

To find out more, visit www.granitepr.co.uk