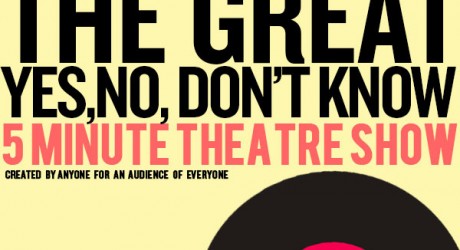 Created by anyone, for an audience of everyone

Performed at various locations across Scotland, the UK, the world and the web, streaming live over 24 hours on 23 June 2014, from 5pm.

THE public submissions deadline is approaching  for the National Theatre of Scotland’s The Great Yes, No, Don’t Know, Five Minute Theatre Show.

Co-curated by David Greig (The Strange Undoing of Prudencia Hart, Dunsinane, Charlie and the Chocolate Factory) and David MacLennan (A Play, A Pie and A Pint series at Òran Mór), The Great Yes, No, Don’t Know, Five Minute Theatre Show will present a series of live scenes, songs, skits, rants and dramas, and will allow anyone, anywhere to democratically and dramatically respond to the theme of ‘independence’ during a momentous year for Scotland.

The National Theatre of Scotland is encouraging the people of Scotland and beyond to have their creative say in the most important decision in the Country’s history in modern times.

Professional or not, old or young, the Yes, the No and the Undecided, absolutely anyone can take part by writing, devising, directing, performing and producing a piece of theatre, five minutes long. There are no set skills requirements; no required qualifications other than a good idea, dramatic flair, and some bravery!

The closing date for submissions is 5pm on Sunday 23 March.

Full information on how to apply

The Great Yes, No, Don’t Know, Five Minute Theatre Show will be a one-day event, filled with over 200 micro theatre shows, all performed in front of live audiences. Theatre makers from Scotland and beyond – professional, amateur and first-time – will be invited to make and perform a piece of theatre, just five minutes long, to be streamed on the virtual stage www.fiveminutetheatre.com for a global audience. In addition to viewing the mini-productions via the online platform, there will be five performance hubs across Scotland, an additional five across the UK and up to five more internationally.

As well as using venues to broadcast from, the National Theatre of Scotland will also be sending out roving crews who will travel across Scotland throughout the 24-hour period to help facilitate theatre- makers, with filming and streaming on location, and unlike in recent years participants can now self-broadcast and watch from a hand-held phone or tablet, on any platform.

First rolled out in 2011 to celebrate the company’s fifth birthday, Five Minute Theatre has been staged on three separate occasions, with those events attracting 1570 performers, aged five to 76, from 53 countries, producing 325 pieces theatre pieces for a combined live audience of 5900 and online audience of over 80,000.

“This brave and groundbreaking event has subtly changed the landscape of Scottish theatre forever.” The Scotsman

“Over one tremendous day in June, we’ll bring together hundreds of plays, sketches, songs, polemics and poems made by groups around the country as well soliciting input from some of Scotland’s best writing and writing and performing talents.

“The show takes the Scottish Variety tradition and propels it into the internet age. The live hubs around the country and beyond will provide an exciting environment for lively debate, one-off performances and thoughtful reflection.

“At this key moment in the nation’s history, it’s a way for the Scotland to speak to itself – not in formal political tones – but in a relaxed, rambunctious, celebratory and personal way; and crucially, it’s a chance for everyone to contribute, not just a political or artistic elite.

“It’s going to be a special event and whether you find yourself listening to a song from Skye at four in the morning, watching a show in a live hub, or enjoying a laugh in the comfort of your own home with a dram beside you, it’s bound to be full of memorable moments. Don’t just come along – take part!”

The Great Yes, No, Don’t Know, Five Minute Theatre Show is part of the National Theatre of Scotland’s Dear Scotland 2014 season of theatre, debate and celebration. The company is inviting audiences to take part in Dear Scotland, not only by coming to events but also through sharing their thoughts about Scotland in 2014.

Audiences and participants throughout the year will be given a postcard with the greeting line, Dear Scotland on which they are encouraged to share their rants and regrets, love letters or break-up sentiments, advice or demands, hopes and dreams, and then to send the postcard back for free to the National Theatre of Scotland. The responses will be interlaced to create a living record of this momentous year.

The public submission process is open and submissions will close on Sunday 23 March at 5pm.

A full programme of performers, productions and venues will be confirmed in Spring 2014.

1. The National Theatre of Scotland is supported by the Scottish Government.  Since its launch in February 2006, the National Theatre of Scotland has been involved in creating over 200 productions in 174 different locations. With no building of its own, the company takes theatre all over Scotland and beyond, working with existing and new venues and companies to create and tour theatre of the highest quality. It takes place in the great buildings of Scotland, but also in site-specific locations, airports and tower blocks, community halls and drill halls, ferries and forests. The company has performed to over 1, 000,000 people across four continents. www.nationaltheatrescotland.com.

For more information on the Dear Scotland 2014 season, visit www.dearscotland.net.