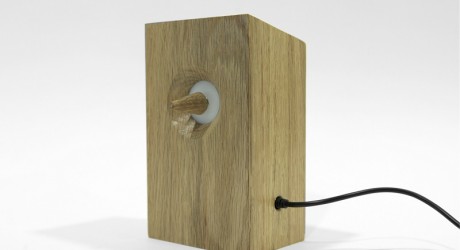 THE Alarming Clock, an unique take on the traditional alarm clock aiming to improve sleeping patterns, is now live on crowdfunding platform, Kickstarter.

The handcrafted Alarming Clock, by Alarming Industries, uniquely features an evening alarm in addition to its morning alarm.

This tells the user when to start winding down, ensuring they are relaxed and can enjoy a full eight hours of sleep.

The alarm signal is created by a mechanical ‘beak’ that imitates the sound of a woodpecker drumming against a tree and replaces the typical electronic buzz that shocks users into waking up.

The sound can be customised by placing the beak against different objects, making it unique to the individual. The clock face is hidden on the underside of The Alarming Clock to eliminate clock watching – a pain point for many individuals struggling to get a restful night’s sleep.

Alarming Industries hopes to raise £15,000 to fund its first production run of The Alarming Clock, buy parts and raw materials and fund testing to allow the clock to be sold in countries outside Europe.

As a ‘thank you’ to supporters of The Alarming Clock’s Kickstarter campaign, Alarming Industries is offering some exciting rewards.

These range from a set of beautifully-illustrated postcards featuring the inspiration behind The Alarming Clock and Alarming tumblers to help you create different sounds to wake up to, to early bird specials and limited edition clocks made from your desired species of wood, giving you a one-off Alarming Clock.

The Alarming Clock is the creation of Scottish designers, Natalie Duckett and Lee Murray.

Founder, Natalie, explains how the Kickstarter campaign will help Alarming Industries grow: “The Alarming Clock has been in development for a long time and we have been crafting it to ensure the highest quality and usability.

“Now we need your help. Launching on Kickstarter, we hope to get backing that will enable us to produce more Alarming Clocks and expand our reach beyond Europe where we already have the CE certification mark.

“It’s also a great opportunity to showcase the product to the world, we hope you like it!”

The first 50 Alarming Clocks are available at the early bird price of £180 on Kickstarter. RRP £220 https://www.kickstarter.com/projects/alarming-ind/the-alarming-clock

300 & 72 dpi images of The Alarming Clock are available here: http://alarmingindustries.co.uk/press/

Alarming Industries was founded in 2012 by Natalie Duckett, from North Berwick, and Lee Murray, from Elgin – both product design graduates from The University of Dundee, Scotland. The company specialises in designing and manufacturing hand crafted electronic products for the home.