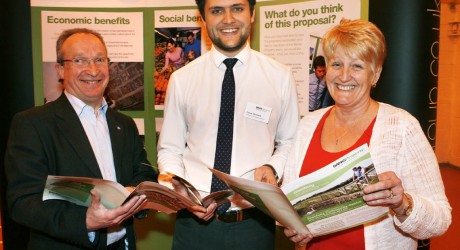 PLANS to regenerate an ex-mining village in North Lanarkshire, with a proposal to create more than 1,000 new homes, have received the overall support of the local community that attended a recent set of public exhibitions.

Unveiled at a series of public exhibitions at Glenboig community centre last Thursday and Friday, villagers were given the opportunity to examine the proposed concept masterplan as well as the proposed benefits that the development could bring to the area.

The Banks Property design team, which is working in partnership with other developers, was on hand to discuss the finer details of its proposals to create 1,040 new properties, near the Gartcosh Business Exchange.

More than 200 local people turned out over the two days, giving Banks the opportunity to answer questions and listen to the views of local people.

Teresa Aitken, development manager of Glenboig Neighbourhood House, the local development trust, said that they had delivered leaflets to hundreds of local houses inviting the community to the public exhibitions on behalf of Banks Property.

She added: “We contacted every resident in Glenboig and the surrounding area and told them this was their chance to make their voices and opinions heard.

“As a result, there was a very good turnout and the exhibitions were very well attended. Of course there was mixed feelings about the development. Some people think it is a good thing, others are not so happy.

“Banks told us they were able to collect a great deal of feedback and felt much of it was positive so we are looking forward to seeing their report on that feedback.

“Banks has been very transparent throughout this process and the exhibitions were very well organised. It is to their cred

it that they have remained in constant dialogue with us and the rest of the community during a very lengthy process.”

Results from the exhibitions showed that 78 per cent of local people thought that the proposed new link road connecting the village with the M73, the business park as well as Gartcosh Train Station, would benefit Glenboig. The numbers in support of the overall proposals were around double of those against. The Banks Property team were also were also given numerous suggestions for the planned community hub.

At present, there are plans to create a centre for the community at the eastern side of the proposals and local people had put forward a range of ideas as to how best this space could be utilised including healthcare facilities, petrol stations and news shops.

Glenboig resident, Michael McDonald, said: “It’s really refreshing to see a developer taking such a holistic approach to the planning of its scheme.

“Being able to go down to the community centre and talk face to face with members of the team was a great way to have our questions answered.

“The team were all incredibly receptive and really did listen to the suggestions we had and took the time to discuss them thoroughly.

“It was great to see the plans for the new link road which will definitely help ease congestion in the village as well as providing a quicker and more direct route to Gartcosh Train Station, which I’m sure, will be welcomed by Glasgow commuters.

“I was also particularly interested in the plans for the community hub and was keen to pass on my suggestions. It’s so important that the village gets what they need from this development and it was clear from the public exhibitions that Banks are working hard to achieve just that.”

Callum Whiteford, development relations co-ordinator at Banks Property, said: “It was very encouraging to see such a high turnout at the public exhibitions. We were delighted with the level of support for the link road and the overall proposals.

“Ultimately, our goal is to make sure that our plans meet the needs of the community and there is no better way of determining what those needs are than by talking directly to local people.

“This has been particularly useful in generating ideas for the community hub. We also got really valuable feedback regarding education provision and access to the school in the mornings which we will now look at very carefully.

“We want to cement the positive relationship we have built with the Glenboig community by continuing to speak and listen to them as we work to finalise our plans and would like to thank them for their support.”

Banks Property expects to submit a planning application to North Lanarkshire Council  later this year and has been buoyed by the resurgence in the Scottish property market.

Banks Property is part of the Banks Group (www.banksgroup.co.uk), a family firm founded in 1976, which now employs 420 people in the property, renewable energy and mining sectors.

It develops land for commercial and residential property development and is committed to creating sustainable communities where people want to live and work, developing sites ranging from less than an acre to more than 300 acres.