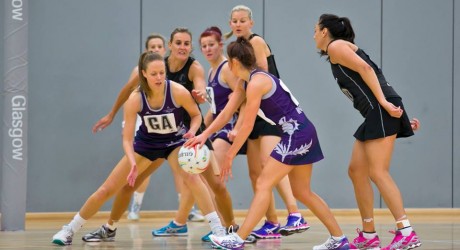 NETBALL’S Scottish Thistles continue their preparations for the 2014 Commonwealth Games with three matches against Trinidad and Tobago in Glasgow.

The team meets the Calypso Girls at the Emirates Arena in a test series on April 1, 2 and 3.

Maggie Murray, CEO of Netball Scotland, said: “This will be an exciting test series as the teams are closely matched – we are ranked twelfth and they are eighth.

“It will be a good challenge for us and we’ve been working hard in preparation.

“The squad’s training is going well and the players are really looking forward to these matches.

“We’re hoping we will get big crowds to cheer the team on.”

Netball in Scotland has been given a massive boost because the Scottish Thistles are in the Commonwealth Games for the first time.

Public interest has never been higher – when 4,000 extra tickets for netball finals in the Games went on sale they were snapped up in a matter of hours.

“There’s talent, experience and great potential in this group of players and we’ve never been in better shape to compete with distinction at the highest level on the world stage,” added Maggie.

If you would like to attend the Scottish Thistles v Trinidad and Tobago test series, please contact Maggie Mallon 07989 962465 for further information and to arrange accreditation.