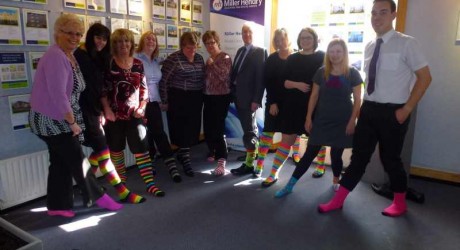 A DAY of wearing silly socks to work has seen Tayside solicitors and estate agents, Miller Hendry, raise just over £300 in aid of Down’s Syndrome Scotland.

Joining in with the funky footwork across their Dundee, Perth and Crieff offices and property shops, the team at Miller Hendry got involved by sporting a colourful array of socks to help raise awareness for the charity.

The campaign, which was part of World Down’s Syndrome Awareness Day, was intended to embrace the fact that, no matter what they look like, they are all just socks at the end of the day – the same as humans are humans, regardless of whether they have 46 or 47 chromosomes.

Clients and colleagues got in on the act, posing for photos on social media in a bid to raise awareness of the condition, as well as encourage members of the public to donate via text or in the offices.

Jen Phinn, works in the Dundee property shop for Miller Hendry and was responsible for getting the campaign off the ground.

She commented: “My twin nephews, Ollie and Cameron, have Down’s Syndrome and I became aware of the international campaign to raise awareness of the genetic condition and really wanted to get involved. I was really proud that Miller Hendry were happy to support the fundraising campaign.”

Ernest Boath, private client partner at Miller Hendry, who also donned a colourful pair of socks on Friday, commented: “We are often, as solicitors, acting on behalf of clients who have genetic conditions like Down’s Syndrome and are very aware of their impact on the individuals and their families.

“Wearing colourful socks to work, instead of the usual plain socks, is such a simple way to communicate the diversity of human life, and to encourage others to give to the charity.

“Even Millie & Henry, the cartoon characters who star in our latest marketing campaign, got involved and our followers on social media were enjoying all the pictures of our estate agency staff and solicitors’ colourful feet all day on Friday.

“This was a very good cause to support, and we are delighted that one day’s efforts raised so much, not to mention the text donations which went directly to the charity.”

MEDIA RELEASE posted by Volpa. You too can post media releases (aka press releases)  on allmediascotland.com. For more information, email here.