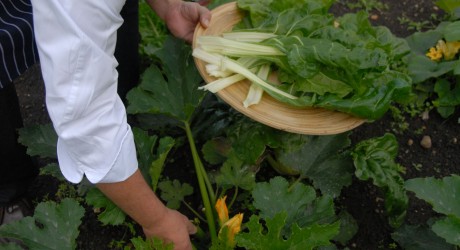 STAFF at an exclusive castle hideaway have been given lessons by a top chef – on how to pick their own ingredients from the fields and woods around the venue.

Trevor Garden, executive chef with Sodexo Prestige in Scotland, is an enthusiastic forager who loves getting into the wild to source and pick his own ingredients.

He surprised staff at the luxury venue near Edinburgh by revealing that hand-picked leaves, roots, berries and mushrooms regularly featured in the banquets and a la carte meals served to guests, who book out the entire venue for exclusive events.

So Trevor volunteered to introduce the castle team to the exciting larder Scotland as to offer, by leading a group just outside the estate grounds to learn the basics of foraging for themselves.

Trevor said: “Using locally sourced produce is a huge part of what we do at Sodexo Prestige, but even then most people associate that with taking delivery of prepacked produce from nearby farms.

“In fact, a growing number of enthusiasts are also interested in getting out in to the countryside and foraging for wild ingredients which  they collect for themselves.

“I love getting out and it can be relaxing and a lot of fun. Some people do it to save money, but I love foraging because the ingredients I pick help me create unique and interesting dishes with a distinctively Scottish twist.”

Dundas Castle is the stunning stately home of Sir Jack and Lady Stewart-Clark which is set in 1,000 acres in the shadow of the Forth Bridges.

It is available for weddings, private functions and corporate events and guests have included wealthy US golfing parties, Chinese billionaires and Russian diplomats. Sodexo Prestige is the castle’s exclusive catering partner.

Lucy Scillitoe, general manager at Dundas Castle, said: “A few years ago it wasn’t unusual for our menu to feature ingredients sourced from exotic locations across the world.

“However, our work with Trevor and the Sodexo Prestige team has seen us move to a menu which is focused on a produce which is locally sourced, in-season and sustainable, so that most of it comes from within ten miles.

“It’s brilliant because Scotland has so much to offer in terms of its natural larder. Not only do our guests enjoy top quality produce, they are increasingly making that one of the main factors on why they choose a venue.

“Trevor takes that even further than most, and the team were fascinated getting out with him and seeing what can actually be picked so close to where we all work.”

During the picking trip members of staff collected wild garlic, hawthorn, pea shoot, ground elder, nettle, gorse and sweet cicely. Trevor also had them digging for a root known as pignuts and hunting for chicken of the woods, which is actually a mushroom which grows on rough-surfaced trees.

South Queensferry-based Trevor has a stellar CV catering for up to 500,000 every year. On a day-to-day basis, he runs Sodexo Prestige’s busy production kitchens which cater to some of Scotland’s most esteemed and historic venues, including Dundas Castle.

The award winning chef is also a key part of the Sodexo Prestige team masterminds catering at The Open both for the visiting public and exclusive dining for players, officials and  celebrities.

Sodexo Prestige is the corporate dining, hospitality and events division of Sodexo and partners with 17 top-class venues in Scotland – and 50 across the UK – including Hampden Park, Royal Botanic Garden Edinburgh and Hamilton Park Racecourse.