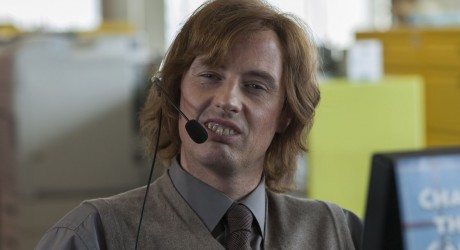 In its 35th year, the Celtic Media Festival is being held in St Ives (2 – 4 April) and is a celebration of the creative talent, languages and cultures of the Celtic broadcasting and media world, on screen and in broadcasting.

The hour-long documentary was written by acclaimed Gaelic comedy writers, Seonag Monk and Calum Mackinnon, and directed and produced by Michael Hines, of The Woven Thread.

The top cast included Greg Hemphill, star of ‘Still Game’ who teamed up with Mairi Morrison as husband and wife B&B owners, Lenny and Flo; Tony Kearney as Torcuil, a dedicated Gaelic learner aiming for the Gold Medal; Fiona Macleod as Ishi, a Gaelic singer with a difference; Calum MacKinnon as WD, the wandering poet and David Walker who plays Neilleagan, an experienced adjudicator awaiting his call-up to judge the Gold Medal.

Winning the Best App award, the LearnGaelic Beginner’s Course : Buntús Cainte app is the result of a collaboration between MG ALBA and 32 Point Ltd and is the world’s first tablet app for learners of the minority languages Irish and Gàidhlig.

The app was produced by Michelle Gallen of 32 Points Ltd with Alan Esslemont of MG ALBA as executive producer.

Alan Esslemont, head of content at MG ALBA, said: “It is fantastic news that BBC ALBA has scooped the best entertainment award at this year’s Celtic Media Festival.

Written and produced by some of Scotland’s best talent and starring a stellar cast, Dà là san Dàmhair: Two days in October was a very clever and entertaining comedy which proved extremely popular with BBC ALBA viewers.

“We are also absolutely delighted that our LearnGaelic app has scooped the Best App award.

“We have worked very hard on this application and pride ourselves, along with 32 Points Ltd, with creating a learning tool that is as effective and rich as any app produced for major world languages.”

“We look forward to the remainder of the festival with anticipation as a number of other BBC ALBA programmes have been shortlisted across a range of award categories, which is testament to the rich Scottish content of Gaelic programmes on offer across many genres.”

Michael Hines, of The Woven Thread, said: “We are immensely proud that our first ever Woven Thread production has won such a prestigious award at the Celtic Media Festival. I have been a big fan of the festival as well as being giving master classes and know firsthand how difficult it is to win an international award.

“It is an absolute honor to win the best entertainment award and I would like to thank the team at BBC ALBA and MG ALBA who worked alongside us on this project, as well as my crew and all the cast members, without whom we would not have been in a position to create such an enjoyable piece of programming for the channel.”

For more information about the Celtic Media Festival and category shortlists visit www.celticmediafestival.co.uk