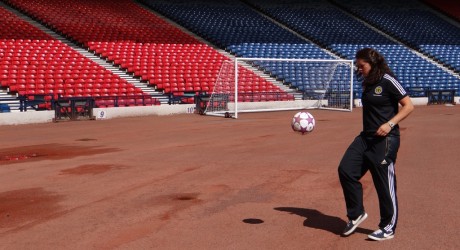 SCOTLAND women’s FIFA World Cup 2015 qualifier against Poland is to be shown exclusively live by BBC ALBA this weekend.

Coverage of the match from Fir Park, Motherwell, will start on Saturday at 5.20pm, with kick-off at 5.30pm, and will be presented by Calum Macaulay with analysis from Laura Montgomery, club manager of Glasgow City FC.

Commentary will be provided by Alex O’Henley.

Scotland currently sit top of Group Four with maximum points from their first four games, leaving them three points ahead of group favourites Sweden but having played one game more.

Tomorrow’s fixture is the return leg of back-to-back qualification matches against Poland and the Scots will enter the game in confident mood after a 4-0 away victory against the Poles in late October, thanks to a Jane Ross hat-trick and a Joanne Love strike.

Anna Signeul’s side will also be boosted by their move to 19th place in the FIFA rankings last week, their highest ever placing and up one spot following their best-ever finish in the annual Cyprus Women’s Cup earlier this month.

Scotland finished fourth overall but were unbeaten in open play after drawing with France and defeating the Netherlands and Australia, only losing out on penalties to Korea Republic in the final placing match.

At half-time, we will take a look behind the scenes at that Cyprus Cup tournament and feature interviews with Anna Signeul, Ifeoma Dieke, Lisa Evans, Jane Ross, Rachel Corsie and more.

Coverage of the 2015 FIFA Women’s World Cup qualifiers is being produced for the channel by mneTV, with BBC ALBA providing a premier sports package that also covers action from the Scottish Premiership, Ramsdens Cup, live shinty as well as live PRO12 league rugby.

Coverage of the 2015 FIFA Women’s World Cup qualifiers is being produced for BBC ALBA by mneTV, one of Scotland’s leading sports production companies. (For further information see www.mnetv.tv).