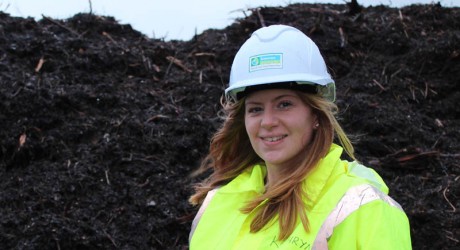 FOR some people the idea of working outdoors would be off-putting, but Kathryn Adams doesn’t mind getting her hands dirty in her role as an environmental and compliance officer at a leading North-east organics recycling company.

Kathryn relishes in her role at Keenan Recycling, based at New Deer, Aberdeenshire, and can be spotted climbing piles of compost to monitor temperatures at the award winning site, come rain or shine.

Kathryn, who grew up in Broughty Ferry, Dundee, spent the majority of her childhood in the great outdoors, and knew from an early age that an office role wasn’t for her.

“My parents were always really active and we spent a lot of our time on the west coast of Scotland doing activities like hill walking, camping, dingy sailing and kayaking.”

After completing sixth year in 2008, Kathryn left home at just 17 to move to Aberdeen to study for a Bachelors degree in Ecology at the University of Aberdeen. She then went on to study for a Masters in Environmental Management and graduated in November 2013.

She was first introduced to Keenan Recycling in 2009 through a Scottish work placement scheme, the Business Environmental Placement, whilst she was in her second year of university.

She said: “I applied for a three month internship with the firm and got a great feel for the company and its ethos during my interview.”

In 2010, Grant and Gregor Keenan, who run the business, invited her back for a second placement with the company.

During her placements, Kathryn was involved in the early stages of setting up an ISO4001 environmental management system for Keenan Recycling, which exists to help organisations minimise how their operations negatively affect the environment. She was also involved in measuring the company’s carbon footprint, and carried out practical work to study waste and compost onsite, to help complete studies and prepare reports.

“My placements were highly beneficial. The work placement gave me some insight into the business world and in retrospect I feel uni courses with a years work placement might be the best choice for someone wanting to follow a career in anything other than academia.”

In September 2013, Kathryn’s work experience at Keenan Recycling paid off when she was offered a full-time position with the company.

“My work placements with Keenan Recycling gave me a very good insight and feel for how well a company is run and the strengths of the people who run it, this is not something it is very easy to get any ‘feel’ of from the outside, no matter how much you research a company.

“In the little time I’ve been here Grant and Gregor have been so supportive and inclusive. I’ve been given exposure to all aspects of the company and although it’s been a very steep learning curve I feel I’m well equipped. For instance I’ve already been on a number of courses to further my training.

After a hard week at work, Kathryn loves nothing better than venturing outdoors at the weekends.

“I really enjoy hill climbing and sailing, and ski-ing is great in Scotland at this time of the year.

“I love being outside, and I am so glad I don’t have a full-time desk job – I know I would be really bored if I did.”

Managing director of Keenan Recycling, Grant Keenan, said: “Kathryn is a fantastic addition to the workforce, and her hard work and enthusiasm for her role really shines through.”