Media Release: Be part of bringing traditional music and song to life across Scotland this year 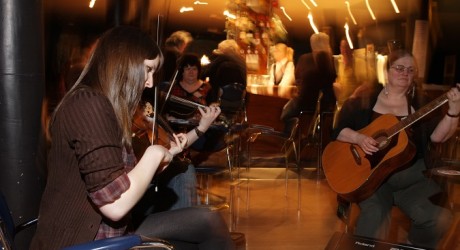 VENUES and musicians are invited to take part in the TMSA Homecoming 2014 Traditional Music and Song Sessions programme.

Funded by Homecoming Scotland 2014 and Creative Scotland, this national programme of sessions will take place across Scotland from late Spring to December.

Organisers, the Traditional Music & Song Association (TMSA) are looking for sessions to happen in many different venues in many different locations. Interested people and venues need to register via the website – www.tmsa.org.uk.

“We are pleased to be working with EventScotland again to bring the opportunity for both visitors and locals to enjoy great traditional music and song on their doorsteps and celebrating Scotland’s traditions in this year of Homecoming 2014,” said TMSA convener, Fiona Campbell.

“The sessions are a fantastic way for locals and visitors to experience Scotland’s unique musical traditions and I hope many venues and musicians will be encouraged to be part of this very special programme.”

For further information on the Session Programme, or for accompanying images, please contact the TMSA on 0792 253 3915, or office@tmsa.org.uk or www.tmsa.org.uk.

The Traditional Music & Song Association (TMSA) of Scotland, set up in 1966, is a membership organisation whose core aim is to foster and promote Scotland’s unique musical traditions. Members include music enthusiasts, amateur and professional performers, tutors, and academics.

The TMSA encourages both widespread popular participation and individual artistic excellence. Its branches provide opportunities for universal participation by running festivals, ceilidhs, concerts, workshops and competitions. The branches sustain the specific cultural traditions of their area, as well as those of Scotland generally.

The TMSA believes that grassroots participation in traditional music and song involving all parts of the traditional community is fundamental to the continued authentic voice of our professional performers and to the very cultural identity of Scotland itself.

The TMSA also organises the TMSA Young Trad Tour and Cultural Exchange – an annual national tour of the finalists of the BBC Radio Scotland Young Traditional Musician of the Year Competition – which includes concerts, recording a CD, and workshops; an annual Event Calendar publicising traditional events across the country as well events organised by local Branches including some of the longest running folk festivals in Scotland.